This sixteen day Burma or Myanmar holiday, as it is now known, travelling in a small group, is a journey into the cultural and natural wonders of this magnificent country which is still really only opening up to visitors. Adding to its mysticism and the sense of adventure all our travellers experience on this holiday. We start in Yangon, the former capital also known by travellers its former name of Rangoon. It is the perfect introduction to Myanmar, with cultural highlights including the Shwedagon Pagoda, vibrant markets, ancient streets and juxtaposition of colonial and traditional timber architecture.

We are able to cover a lot of the country on this trip by taking internal flights, the first one being from Yangon to Bagan further north. This is the place that many people come to Burma for, with literally thousands of temples and pagodas stretching out to the horizon. With some dating back to the 11th century, they honour both Buddhist and Hindu religions, and you get a spectacular view of them at sunset at Shwe Sandaw Temple, with its 360 degree views.

Another flight takes us to Mandalay, the colonial city which was made famous by Kipling, but much of which was destroyed during WW2. However, plenty of architectural and cultural wonders remain, many of which can be seen on our walk up Mandalay Hill, with the most extraordinary array of sparkling stupas, mosaics and gardens. And, after walking up (the traditional way is barefoot) you can make a wish at the iconic at Sutaungpyei Pagoda, which means wish fulfilling.

Another wish come true on this trip is visiting the nearby U Bein bridge, the longest teak bridge in the world, at 1.2km. Seeing it at sunrise is an unforgettable sight, as local villagers cross it to go to work, and fishermen prepare their nets for the day. Just another beguilingly beautiful aspect of every day Myanmar life.

It is hard to choose from Myanmars fineries for the perfect finale, but Lake Inle is definitely one of the most memorable places for most visitors. En route to this serene wonder, we stop at the former British hillstation of Kalaw, which is now as an eclectic mix of Palaung, Danu and Pa-O tribal populations. At Lake Inle itself, where we spend three days taking in the waterside life, it may be quotidian for local people, but it is quintessentially Burmese for visitors. With its stilt-house villages, floating vegetable gardens and markets, and expert fishermen who are famous for wrapping one leg around their paddle in order to leave their arms free to cast their nets. We have an option to go cycling into nearby villages, home to brightly dressed hill tribes, visiting mountainside pagodas and artisan workshops along the way. A lot to take in, admire and be in awe of really, before taking a final flight back to Yangon which brings our magnificent Myanmar trip to a close. 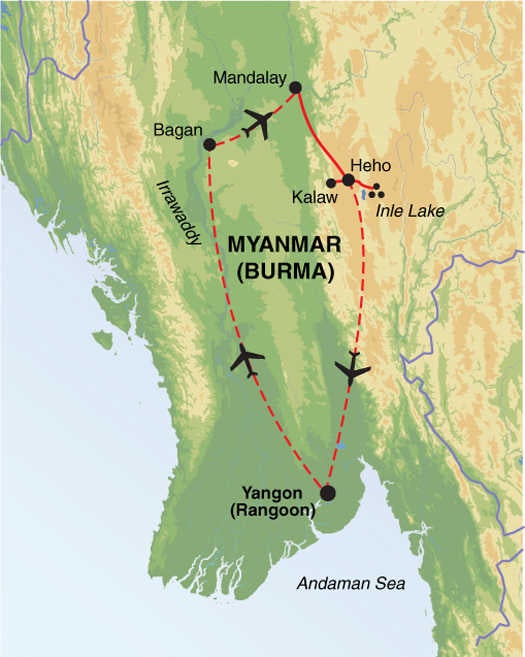 2 minute summaryBest time to go
Myanmar's decades of isolation have meant that its unique ways of life have remained largely intact. Visitors are astounded by what the Myanmars can c...

Small group tours:
Small group travel is not large group travel scaled down. It is modeled on independent travel – but with the advantage of a group leader to take care of the itinerary, accommodation and tickets, and dealing with the language. It’s easy to tick off the big sights independently – but finding those one-off experiences, local festivals, travelling markets and secret viewpoints is almost impossible for someone without the insider knowledge gained from years in the field. Those with a two-week holiday, a small group tour will save valuable planning time.
Our top tip:
If travelling from October-February, pack very warm layers. Kalaw and Inle Lake in particular can drop to freezing at night.
Trip type:
Small group, min. age 16. Max group size 16.
Activity level:
Moderate. One 5-6hr walk, which can be shortened to 3hrs.
Accomm:
Standard hotels, en suite rooms.
Solos:
Solo travellers welcome. Single rooms available with surcharge.
Included:
Accomm., transport by private bus and internal flights, tour guide, listed activities, intl. flights if booked.
Meals:
All breakfasts, one lunch.

I loved the balloon flight over Bagan. Read full review

Brilliant.... The most memorable part of the trip was all the temples and pagodas as well as the amazing food and the friendliness of the local people. Read full review

The most memorable was ballooning over Bagan - that was seriously amazing! Read full review

Learning about Myanmar was the best highlight. Read full review

Memorable: the friendliness of the Burmese people, the close-up look at the cottage industries we were taken to see, and the cruise at Inle Lake. Exciting: Sunrise over Bagan and the U-Bein bridge; visit to the Red Mountain vineyard, the Irrawaddy river cruise, the New Moon festival and parade at Inle Lake. Read full review

Almost perfect. Our guide was fun as well as being really informative. Apart from the hotel in Yangon all the accommodation was much better than I expected. We had virtually no free time as the guide offered so many options. This was wonderful as we packed as much as possible into the 2 weeks. Read full review

Watching the sun set over the plains of Bagan would be very hard to beat. The most memorable aspect would be the people themselves, they were beautiful, gracious and friendly. Read full review

The trip on Inlay Lake was the most memorable because I had no previous mental image of this place and the complexity of life on and around the water. Read full review

UK office
It all starts at home so we have first worked to reduce our carbon footprint in our UK offices. Through energy conservation measures and recycling policies in place, we are proud to be actively reducing the waste produced and our impact on the environment. We support various projects all over the world to try and give something back to the places we visit.

Group size
We operate small group tours that have a low impact on the communities we visit and we always ensure our operations do not disrupt or lead to the displacement of local people. This allows us to stay in unique and characterful accommodation that would not have benefitted from tourism due to their limited size.

Community:
We are conscious of the economic welfare of local communities and take as much opportunity as possible to buy local crafts and produce (on at least 6 days of the tour). One of our clients favourite locations to do this is the famous lakeside market on Inle Lake where locals gather with their colourful boats to sell fresh produce and traditional wares. There is a five day cycle for the lakeside market that literally circles the lake; here people come to sell their traditional wares early in the morning and return to their village for the afternoon. Depending on its current location we will be able to visit it, but if not, there are plenty other places to support cottage industries along the way e.g. seeing how tofu is made and sold with yellow split peas when we pass through KaungDaing.

Act Local:
All of our tour leaders are local and they are given regular training on responsible tourism issues so they can help preserve the way of life in their area. By using local leaders, we also hope they educate their own communities to help them maximise from our visit. Clients also gain a more genuine, passionate insight into the country.

A Fair Deal:
We work closely with our local operator and ensure that all of our guides are local and that in exchange for their expertise that they are paid and treated fairly. Our leaders and guides have been trained in responsible travel and actively encourage our suppliers, drivers, and other members of our team to respect the environment, protect the culture and support the local economy. By using local leaders, we also hope they educate their own communities to help them maximise from our visit.

Kalaw:
In Kalaw we are accompanied by local guides as we explore the area on foot. The tracks we use are centuries old trading routes used by the Pa-O, Palaung and Danu ethnic minorities for moving their cattle and harvesting their crops, and afford spectacular views of the surrounding countryside. This helps support villages not reached by other companies and we will have a warm welcome from the local villagers. 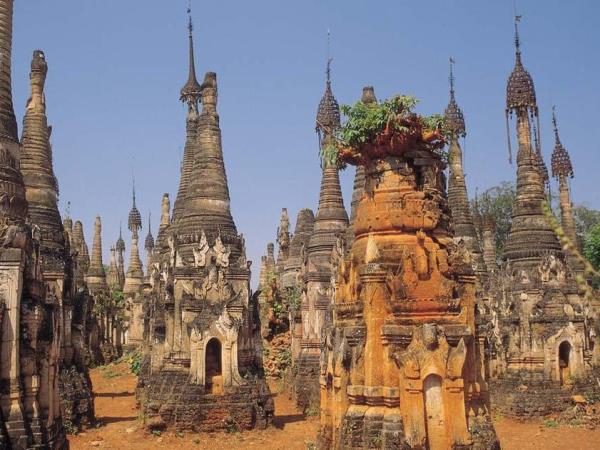 A tailor made trip to undiscovered Myanmar 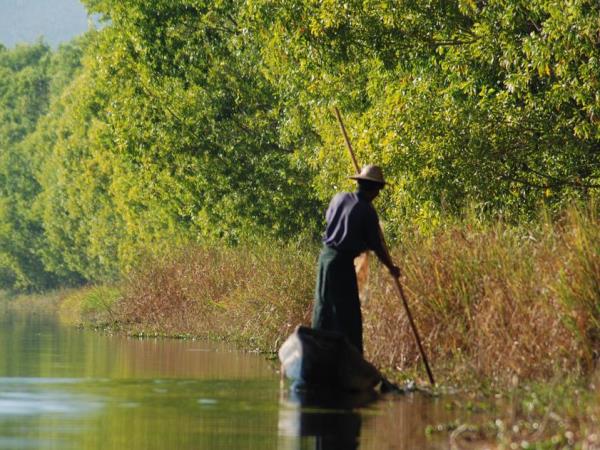 Discover a side of Myanmar hidden beyond the tourist trail 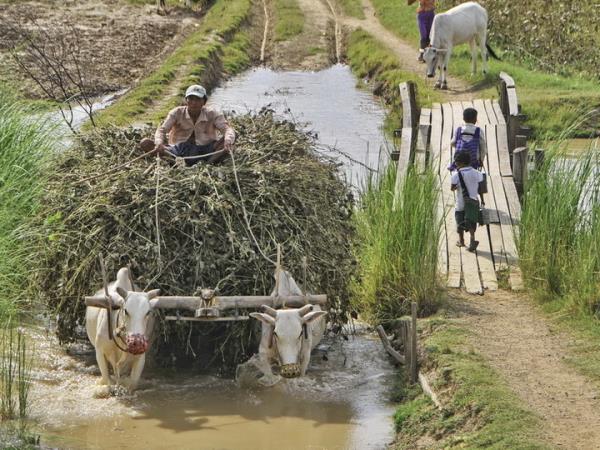 From £2550 12 days including domestic flights only