Description of Georgia and Armenia holiday

As these are still very unknown destinations when it comes to travelling, it can be hard for independent travellers to know where to start when it comes to a Georgia and Armenia holiday. Which is why this small group holiday, travelling with an expert local guide around the cultural and natural highlights of these two fascinating countries works really well for first time travellers. We fit a lot into two weeks following a carefully crafted itinerary, with plenty of magnificent landscapes and culturescapes along the way.

Starting in Yerevan, Armenias capital, and one of the oldest cities in the world, we explore its juxtaposed cool, cosmopolitan city life with its traditional Orthodox Christian architecture and heritage, from the main cathedral to the 7th Century ruins of Zvartnots Cathedral.

Monasteries are magnificent and prolific in Armenia, and we take time to visit some of the greats, including the UNESCO World Heritage Site Geghard Monastery, in a dramatic location partially carved into the mountain, and surrounded by cliffs. Khor Virap Monastery is also in a stunning position looking out to the often snow capped summit of Mount Aratat, over the border in Turkey. Indeed, visiting the spiritual is often a great way to also take in the natural in Armenia, with Noravank Monastery sitting between the sheer, red cliff walls of the Amaghu River gorge, and Tatev Monastery perched on the edge of the Vorotan Canyon. And there many more such examples to discover before crossing the border into Georgia, for the second part of this holiday.

Starting in the Georgian capital city of Tbilisi, this is a great town to walk around as we take a guided tour through the cobbled old town, where cathedrals, basilicas, synagogues and mosques stand side by side in the shadow of the Narikala Fortress. There are also numerous art galleries and museums to explore in your free time here.

The mountains also play an almost spiritual role in Georgia, the Caucasus rising to heights of over 5000m, home not only to superb hiking trails, one of which we will take on for those who wish, but also to several dramatically located places of worship.

Similarly dramatic is the prehistoric cave town of Uplistsikhe, just outside Gori high up on the banks of the Mtkvari River. This is a superb archaeological site, with a world of ancient temples, theatres and tunnels to be visited. Gori is also a must visit, not so much for cultural wonders but for the museum that is dedicated to the towns most infamous resident, Josef Stalin, who was born here in 1879.

Before completing this trip in Tbilisi, there are two other important cities to visit in Georgia. First, Kutaisi , which is the countrys third largest city and a UNESCO World Heritage Site that is brimming with culture, churches and cathedrals. And finally, before returning to the contemporary capital, we visit the ancient capital of Mtskheta, home to a vast 11th century cathedral as well as the stunning 6th century Jvari church, perched on a hill overlooking the town and valley, and another of Georgias fine UNESCO World Heritage Sites. Which brings us nicely back to Tbilisi, the UNESCO utopia of them all. 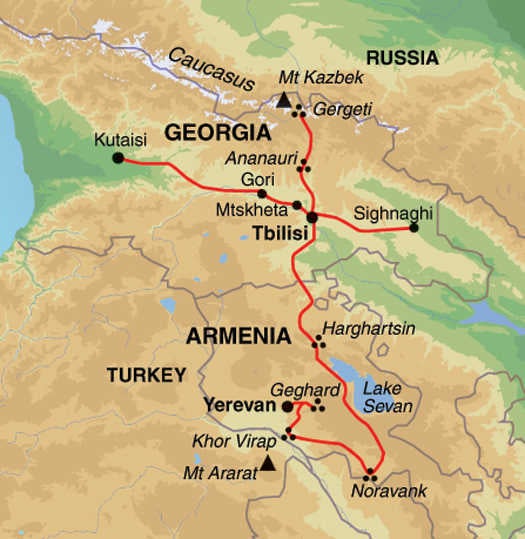 2 minute summaryBest time to go
Chacha toasts in Georgia, carved stone khachkars in Armenia, and karabakh horses in Azerbaijan; if you're looking to untangle the cultural characteris...

Small group tours:
Small group travel is not large group travel scaled down. It is modeled on independent travel – but with the advantage of a group leader to take care of the itinerary, accommodation and tickets, and dealing with the language. It’s easy to tick off the big sights independently – but finding those one-off experiences, local festivals, travelling markets and secret viewpoints is almost impossible for someone without the insider knowledge gained from years in the field. Those with a two-week holiday, a small group tour will save valuable planning time.
Our top tip:
If you have the time in Yerevan, visit the Sergei Parajanov Museum which gives a fascinating insight into Armenia & Georgia through film.
Trip type:
Small group.
Activity level:
Moderate.
Accomm:
11 nights hotel, 2 guesthouses
Solo:
Solo travellers welcome. Single rooms available at a supplement.
Included:
Accomodation, transport, listed activities, tour leader, flights from London (if booked), transfers.
Meals:
All breakfasts, 6 lunches, 8 dinners
Diet:
We cater for both vegetarians and vegans.

8 Reviews of Georgia and Armenia holiday

The scenery was the most memorable part of the holiday. Read full review

The most memorable part of the holiday was lunch with a wine producing family in Eastern Georgia and meeting a Russian family in their home in Armenia. Read full review

The most memorable part was the stunning spring/summer landscapes of Georgia and Armenia. Very very good. Local guides were excellent. Read full review

All of it..... everything was memorable. Read full review

Walking in the national park in Georgia was the highlight. Read full review

Best bit: The hike up to the Gergeti monastery in Georgia. Wonderful location. Read full review

Local Crafts and Culture:
We are very proud of local crafts and culture in Georgia and Armenia and our local guides are enthusiastic about briefing our clients on opportunities to experience this. In the mountainous regions in front of the churches and fortresses on the itinerary, local people can be found selling handmade goods on stalls such as hats, socks, jars and horns etc. Guides also encourage guests to sample some of the wonderful locally produced food and drink along the way e.g. in the small village of Areni, we stop at a winery where the finest Armenian wine is produced. Here we can try and buy these traditional wares which economically benefits local communities by supporting small businesses. Of course the biggest way we endorse culture with our trip, is to visit so many cultural hotspots and UNESCO sites: Geghard Monastery, the Genocide Memorial at Yerevan, 7th Century ruins of Zvartnots Cathedral, mediaeval monuments at Sanahin or Haghpat, just to name a few.

Accommodation and Meals:
Over the course of the trip, we spend several nights in small, family-run hotels and guesthouses. Through this practice, our business provides employment and additional income to lesser known areas and their inhabitants. All the hotel food is homemade, using locally produced and sourced goods wherever possible. Furthermore, guests often have the exciting opportunity to learn from their hosts how to prepare traditional dishes. This kind of genuine experience is priceless and could not be possible in very large groups in industrial sized hotels. We would recommend trying Georgian specialties like Khachapuri (cheese pies) and Khinkali (meat dumplings); in Armenia be sure to sample Khoravats (barbecues) and Dolma (stuffed vine leaves). 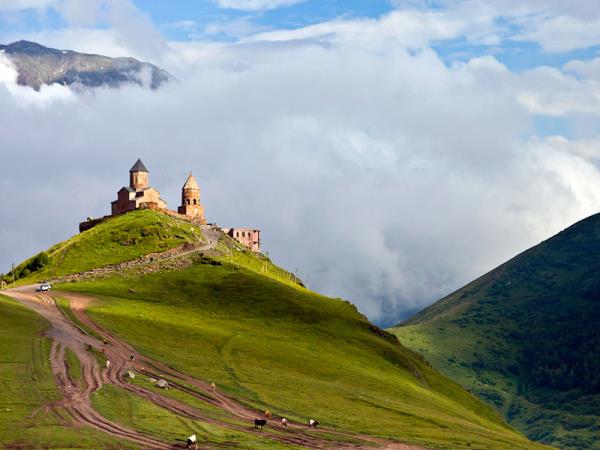 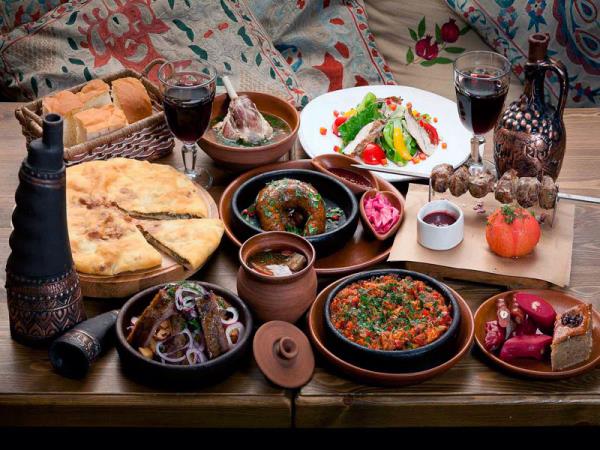