Gozo beaches range from those that front popular hotels and restaurants to more secluded and less crowded bays that are only accessible on foot. San Blas Bay is the most beautiful of Gozos beaches reached by an adventurous walk down a very steep track, perfect for swimming and snorkelling. There are family beaches on Gozo that are more accessible and also the Inland Sea where you can snorkel along an 80m tunnel out the open sea .

Despite its small size, Gozo has a surprising variety of beaches which range from long stretches of fine red and golden sand to small hidden coves in tiny inlets. Some beaches are fronting the popular resorts of the island, with hotels and restaurants behind the promenade whilst others lie at the end of paths and tracks and are only accessible on foot.
One of the most beautiful beaches on the island is San Blas Bay just below the pretty town of Nadur, at the end of a steep sided valley lined with terraces of fruit trees and small allotments.

It can be accessed only by a very steep track which is certainly not for the fainthearted but the reward is well worth the effort. The golden sandy beach, with excellent swimming and snorkelling beneath steep cliffs, is seldom crowded, except in the summer months when a small café provides food and refreshments.

To the east, the tiny beach of Dahlet Qorrot is a favourite for Gozitan families, with some parking close to the beach and deep water by the rocks for those who want to snorkel or dive into the clear water. To the west Ramla bay is one of the most popular beaches in the island, with easy access by car, a long beach backed by dunes of fine red sand and life guards in attendance during the summer months. Here the ancient wall built by the Knights of St John just offshore to deter invaders from landing can still be clearly seen from the viewing point at Calypso’s Cave just above the beach. 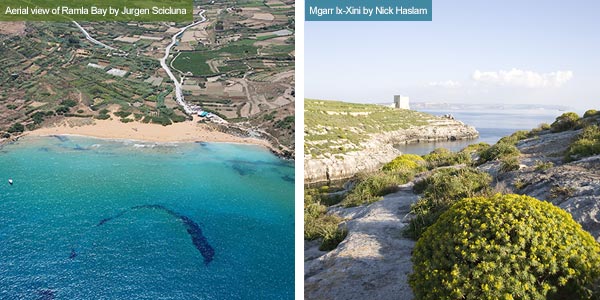 At Marsalforn, the island’s most popular resort, there is a small beach with restaurants and hotels at the sea’s edge. In summer people come in their own boats from Malta to have lunch, and water polo is often played in the clear water just off the promenade. To the south west the Inland Sea at Dwejra, formed when the roof of a vast cave collapsed many thousands of years ago, offers the chance for a sheltered swim off the small sandy beach, or the opportunity to snorkel out through the 80 metre long tunnel which leads to the open sea just beneath the Azure Window.

Fishermen regularly take visitors from the beach through the tunnel in their boats to see the towering arch of the Azure Window and Fungus Rock just along the coast. Xlendi on the southern coast, a charming village set in a steep sided rocky inlet with a small beach is popular with Maltese visitors in the summer months. A line of restaurants and hotels just behind the beach offer excellent seafood menus, the fresh fish supplied by fishermen who keep their boats moored in the tiny port.

Heading west again the lovely inlet at Mgarr ix-Xini, complete with a 17th century watchtower looking out towards Malta has a peaceful tiny pebbly beach with excellent snorkelling in the clear waters beneath the limestone cliffs. There is a small cafe , and in summer and winter local men bringing their trotting horses here to cool off in the sea after training.

Facing Comino, on the western coast, Hondoq ir-Rummien bay has a small beach with plenty of parking which is popular with local families.

Family activity holiday on the beautiful Island of Gozo