There are Gozo events year round covering all types of celebrations and religious festivals. Carnival events and Easter start off the year when Gozos religious culture really comes to life. Events in Gozo in the summer centre around arts, crafts and agricultural festivals and later in the year there are live music festivals covering everything from opera to traditional and contemporary music. Other events in Gozo include a wine festival with wine tasting and musical entertainment.

Nadur Carnival - February / March
A spontaneous and creative carnival with no rules.

Holy Week and Easter - March / April
Religious culture really comes into its own at this time of year. Holy week is a sombre and fascinating time, in contrast with the happier festive mood of Easter Sunday. Gozo also marks Lent, Good Friday and Easter by seasonal food specialities only available in this period of the year as well as through the abstinence of certain food.

Il Wien Ir-Rebbiegha - Zebbug (Colours of Spring) - April
An event for all the family, including fireworks, the traditional blessing of various animals and a horse display amongst other things.

Agricultural Exhibitions - 29th June, 14th-15th August
The June exhibition takes place in Nadur and exhibits included not only agricultural products but also traditional crafts. The August agrarian exhibition is held at Villa Rundle Gardens in Victoria and hosts more than 5,000 exhibits of farm animals, song birds and local produce as well as home-made wines, honey and oil. Traditional folk singing entertains the crowds on the evening of the 14th of August.

Lejlet Lapsi, Victoria (Rabat) - May / June
The capital city comes alive with a wide variety of performances, entertainment and exhibitions spread over a weekend of activities.

Victoria International Arts Festival, Victoria - Summer
Features artistes from the Maltese Islands and as well from all over Europe. All performances are free of charge.

Festa of the Village Patron Saint - Summer months
Every town and village celebrates the feast of its patron saint with indoor religious functions and outdoor festivities. Processions, ground and air fireworks, band marches and revelry. Festas are held every weekend throughout summer and details of forthcoming feasts are advertised in the local newspapers. Feasts to look out for: Feast of St Peter and St Paul (29 June) in Nadur, the feast of St.George (July), the feast of St.Mary (15 August) and the feast of Our Lady in Victories in Xaghra (8 September) 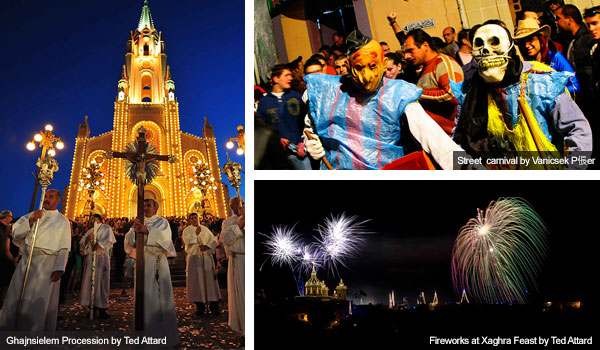 Gozo Music Festival - August
Contemporary artistes as well as performers from other eras wchich remain favourites amongst all audiences.

Christmas in Gozo - December
Numerous events and celebrations which bring together the religious and secular dimensions of Christmas. Also a large animated live crib known as “Bethlehem in Ghajnsielem”.

New Year's Eve in Gozo - December
A very diverse entertainment programme which suits all kinds of tastes: lavish gala nights, top musical acts, and more.
Responsible Travel would like to thank the Ministry for Gozo for their sponsorship of this guide