Gozo is a great place to visit to explore ancient monuments, temples and catholic churches. The incredible Ggantija temples built around 3600BC are the star of the show being some of the oldest stone structures found anywhere on the planet. There are spectacular churches dotted all over Gozo, one of the oldest being the cathedral in Cittadella where a Roman temple to the Goddess Juno was unearthed beneath the foundations.

The most extraordinary temple on the island is that of Ggantija in xaghra, where a series of stone structures which are believed to have been built around 3600 BC are thought to be the world's oldest free-standing above-ground stone structures.
Consisting of a series of semicircular apses the temples were possibly used for rituals which may have included animal sacrifice, which would, according to studies undertaken in similar sites elsewhere, have been performed by an elite group.

Considering that these neolithic people had no metal tools, and were illiterate, the architectural and engineering skills used to manoeuvre and key together the immense limestone megaliths which weigh up to 50 tons show very high levels of technical knowledge.

It suggests also that their society must have been well organised to coordinate the manpower needed to transport and erect the stones, which came from sites more than a kilometre away from the Ggantija site in Xaghra. Very delicate and fine statuettes discovered in a burial site close by excavated in the 1980s and 90s indicate that the temple building society also possessed a sophisticated and refined artistic culture (these figures can be seen in the Gozo Museum of Archaeology in the Citadella).

A deeply religious island today, with 15 parishes amongst its population of 30,000, Gozo has many magnificent churches whose size and richly decorated interiors indicate the pride with which they are held by their parishioners. Built and supported by public donation, the churches today are still a vital part of community life, with the village priest held in considerable esteem by both young and old alike. 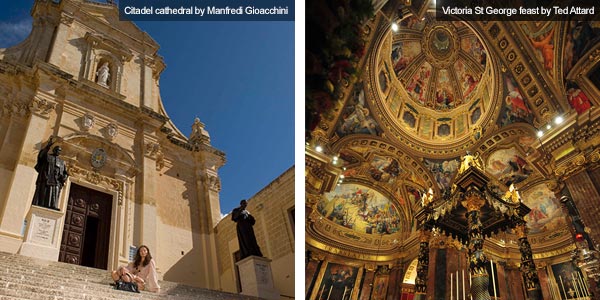 Each town and village has its own church, but perhaps the most impressive is the Ta'Pinu sanctuary which stands on its own in open countryside near the town of Gharb.

Behind the altar are an extraordinary collection of ex voto offerings, giving thanks to the Virgin Mary whose voice, according to local belief, has been heard speaking from the old chapel which stood on the site in the 19th century and who has been credited with working miracles in the area.

Now Malta's most significant pilgrimage site with a high neo Romanesque steeple constructed of golden limestone, it has been visited by the pope John Paul II on 26th May, 1990. Today many pilgrims come from all over the world to worship here and to climb the stations of the Cross which wind up the hill opposite the church.

Far simpler, but with a similar isolated rural setting, the Chapel to the Greek Saint Dimitri near Birbuba in the village of Gharb is a small simple building which dates back to the 16th century. According to local legend the saint flew on horseback from the painting set above the altar to save the son of a local woman who had been carried away by Turkish corsairs and plucked him from the galley for safe return to his grieving mother. Today the tiny church is still used for masses and for larger celebrations on the saint’s day in April each year.

One of the most impressive churches on Gozo is in Xewkija, where the massive Rotunda of the Parish church of St John the Baptist dwarfs everything in the neighbourhood, standing some 75 metres high and towering over the town square. The largest church in Malta, and the largest unsupported dome in Europe outside St Pauls, the interior has pews for nearly four times the population of the town. Built entirely by public subscription in the 1960s and 70s visitors today can take a lift to the edge of the dome to enjoy the magnificent views across Gozo to Comino and Malta itself. 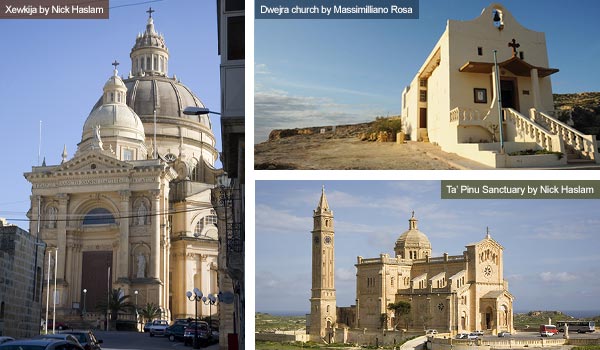 The most historic church on the island is the lovely cathedral within the Cittadella. The site on which the cathedral stands has been historically a place of worship for at least two millennia for during recent reconstruction work the remains of an ancient Roman Temple to the Goddess Juno were unearthed beneath its foundations. Churches were then built here over the centuries but little was left following the Turkish siege of 1551, when the Cittadella was sacked and the entire population of the island carried off into slavery.

The current building dates back the early 18th century with remarkable marble inlaid floors and a lovely trompe l’oeil dome above painted in 1739. The cathedral also has a museum of religious paintings, and church furniture, including the small landau in which the bishop would make his island rounds in the 19th century.

Rabat’s other parish church, St George's Basilica, is also well worth visiting, with its wonderfully ornate ceilings of gilded stucco, floors of inlaid marble and a statue to St George impaling a dragon. The saint, like so many others in the churches of Gozo, is brought out of the church on his festa or feast day carried in processions by the faithful around the parish. The festa day is both a religious and secular celebration, and with dancing and fireworks continuing late into the night is one of the most important social and religious events to be held on this small island.