Things to see & do in Gozo

There are many amazing things to see and do in Gozo from visiting ancient temples and traditional villages to exploring the beautiful coastline and scuba diving in crystal clear sea. Other things to see and so in Gozo include visiting Comino the third smallest of the Maltese islands, exploring the Cittadella, walking between sleepy villages through the Gozitan countryside or visiting impressive rock formations like the Azure Window and Inland Sea.

Gozo things to see and do

1. The Cittadella
The golden limestone ramparts of the Cittadella dominate Rabat/Victoria, Gozo’s tiny capital and its hilltop site has been occupied for more than three thousand years since first fortified by the early Bronze Age inhabitants of the island.

Subsequent occupiers of Gozo have exploited the Cittadella’s dramatic and strategic location, from the Romans who built an acropolis and temple dedicated to the goddess Juno, to the Knights of St John whose high walls still stand on the southern side of the current structure.

Until the end of the 13th century, the entire population of the island slept within the walls of the Cittadella each night for fear of attack by pirates and slavers and in World War 2 the deep cellars were used as air raid shelters during heavy bombing by Axis air forces. Today a stroll through the narrow alleyways of the golden limestone fortress, which also houses the island’s main archaeological museum and the cathedral is a deeply evocative experience. Complete with graffiti scrawled in the soft stone by idle soldiers more than three centuries ago it is the ideal place to get a feel for Gozo’s complex history and to enjoy the spectacular views across the island from its high ramparts.

Built between 4,100 and 2,500 BC the imposing temples, with walls of large hard coralline limestone megaliths which weigh an estimated 50 tons each, demonstrate an advanced level of engineering knowledge on the part of their illiterate builders.

The nearest source of the stone used in the construction is more than a kilometre away from the site and still today the method of transportation of such huge blocks is still not fully understood, especially when the total population of Gozo at the time was estimated to be not more than 2,000 people. Comprised of a series of circular enclosures or apses, the actual deities worshipped in the two temples on the site are unknown, but niches in the walls and bones found during excavations suggest that animal sacrifices were an important part of the religious rituals performed.

3. Dwejra & the Azure Window
This extraordinary natural arch – standing some fifty metres above the crystal clear sea in the protected area of Dwejra – is an iconic site in Gozo and has been used as a location in many recent major feature films.

Immediately behind the arch, the Inland Sea, formed when the roof of a huge cave collapsed has created a natural large saltwater lake connected by a narrow tunnel some 80 metres long to the open sea.

Snorkelers and divers can use the tunnel to get to one of the ten best dive spots in the Mediterranean, with underwater chimneys, drop offs and reefs where many species of fish, from barracuda to groupers are regularly seen. A short walk away over wave smoothed limestone sprinkled with ancient shell fossils, the high block of Fungus Rock stands close to the sea. A parasitic plant which grows on its surface was harvested by the Knights of St John who believed it had miracle working powers as a cure-all. 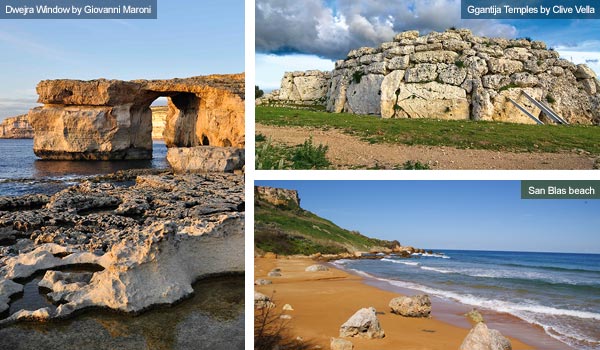 4. San Blas Bay
This lovely bay lies just below the picturesque town of Nadur. The valley leading down to the beach is a riot of colour in spring from wild flowers and the blossom of lemon and orange tree groves, and the many other fruit trees which line the terraces winding along the contours of the hillside.

With its restricted access thanks to a very steep track – cars have to be parked at the top of the cliffs – the beach is rarely crowded except in the height of the season.

Those unintimidated by the thought of the hard climb back at the end of the day are rewarded by a clear sea and beaches of golden sand with some excellent snorkelling beneath the high cliffs which line the bay. On the headland above, the Ta’Sopu tower, built in 1667 as part of the warning system against invading pirates and corsairs, has been recently restored to its original state, the limestone carved coats of arms of its original makers from the Knights of St John still clearly visible .

5. Victoria / Rabat
Gozo’s capital, still known as Rabat by Gozitans despite being renamed Victoria in 1887 for the queen’s golden jubilee, lies on the southern side of the imposing medieval Cittadella and is a pleasant small town of narrow streets and sunlit squares.

The principal square called It-Tokk by townspeople has a small market every morning and is lined with cafes which are popular with locals and visitors alike.

On the wide Republic street, two of most important institutions, the Leone Band club, and the La Stella Band club face each other across the street, each with a large theatre and each vying with the other to produce the most fabulous operatic productions every year. St George’s Square, with the high basilica of St George on the southern side is a pedestrian area and an ideal place for a coffee or a cold drink in the heat of the day. The splendid interior of the church, with its ornate interior of marble, gilt and ebony is one of the most impressive on the island.

6. Comino
The tiny island of Comino, the third and smallest of the Maltese archipelago, lies between Malta and Gozo. On the southern point of the island dominating the channel is the square tower built in the early 17th century by the Knights of St John as a deterrent to pirates and corsairs who used Comino as a base to raid the neighbouring islands.

A tiny chapel stands in the centre and a priest from Gozo comes over by boat to give mass once a week in summer.

With a permanent population of only 4 people, the island from September to May is a tranquil place, with the occasional visitors coming over on the ferry from Gozo or Malta to watch birds or to walk around the coastline. In the summer the island can get crowded with tourists who head to the lovely Blue Lagoon, where the white sand and clear turquoise water set in a small circular bay make it make one of the most popular swimming and snorkelling spots in the entire archipelago.

7. Scuba diving
Gozo has some of the best diving in the entire Mediterranean with excellent visibility often in excess of 40 metres, a wide variety of dive spots for all levels of experience, and easy access from beaches and inlets around the island. The Blue Hole in Dwejra is classified as one of the ten best dives in the Mediterranean, accessed through a rock pool into the deep 16 metre water beneath the Azure Window itself. There are 3 wrecks off the island’s southern coast, which have been sunk expressly for divers and which are no more than a twenty minute boat ride from Mgarr, Gozo’s main port.

Dive companies on the island are well equipped, taking divers to shore dives by special small trucks, or by rib and boat to offshore locations. And if the weather conditions make diving difficult, a calmer location on the leeward side of the island is never more than a 15 minute drive away. Gozo today is the perfect place for all ranges of ability, from beginners wanting to get their first qualifications, to top divers looking for easy access to deep water. 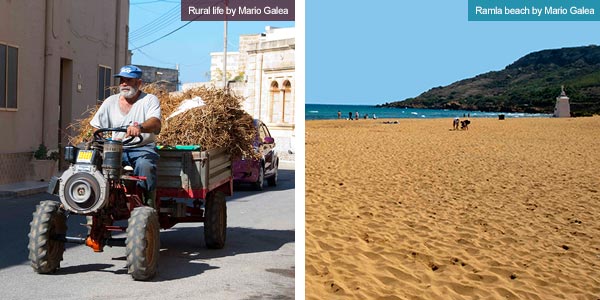 8. Rural Tourism
Gozo throughout history has had to be self sufficient and sustainable. Today, contact with the land is still important for most Gozitans with many tending tiny gardens and allotments or small farms close to villages and towns where they grow vegetables and fruit, or to keep goats, chickens and bees. Visitors to the island can now stay in luxuriously restored farm houses in small villages or in the countryside itself to gain a real experience of the Gozitan rural lifestyle, or actually engage in hands-on agro tourism by staying at a working farm and small estate in the centre of the island.

Here traditional foods, from fruit and cereals to goats’ cheese and wine are still harvested and processed in a traditional way.

9. Ramla Bay
On Gozo’s northern coast, with easy road access, Ramla Bay is one of the most popular beaches on the island. Its shallow seas, fine golden red sand, with lifeguards in attendance during the summer months ensure the beach is busy in the high season with local families and visitors. Close by on a rocky outcrop with a wide outlook over the bay from the viewing point, is the famous Calypso’s Cave, where, according to legend, the sea nymph Calypso kept Odysseus captive for 7 years on his way home after the Trojan Wars.

From the viewing point a dark line of rocks in the sea marks the old wall erected by the Knights of St John in the 16th century to prevent invaders landing on the sandy beach. Close by in the sides of the cliff conical pits are still visible which were used as primitive canon to blast hostile incomers with rocks and boulders.

10. Walking
With its balmy temperatures in the spring, when the countryside is covered with wild flowers and blossom; and in the cooler days of winter and autumn Gozo is the perfect location for walkers. Even in the heat of summer the early morning or evenings are lovely times to take a stroll . With few steep hills, plus the sleepy villages of the interior and the quiet fishing villages of the coast most Gozitan walks will have a great deal of variety. Inland trails follow ancient pilgrims’ ways or shepherds’ paths across rolling farmland passing by isolated churches and shrines, or dipping down to hidden beaches or rocky promontories.

The most important locations of Gozitan history are never far away, from the watch towers built by the Knights of St John, to the Napoleonic fortifications overlooking Mgarr, the principal port. The excellent public transport means that walkers seldom have to retrace their steps at the end of the day, and the small size of the island mean that a walker can visit the interior of the island and also get to a beach for a cooling swim easily within a few hours.