Take yourself off on the ultimate train ride as you read an informative tale by responsible traveller Matt Scott and find out what its really like to undertake the Trans Siberian railway journey, dried noodles and all.

A tale of the ultimate train ride

The Tran Siberian Railway is the ultimate rail journey, the longest in the world, possibly the coldest if you go at the wrong time of year and the only journey that travels in two continents in a single journey, while staying in the same country. Without leaving your seat you can clatter your way along almost a third of the globe; the Trans Siberian is a journey of almost mythical proportions. Matt Scott tells the story of his journey on this legendary train.

There are three routes that travellers can take to explore the expanse that is Siberia: The Moscow to Vladivostok route at over 9,650km and two routes that leave Moscow heading to Beijing, one going through Mongolia, taking six days and travelling almost 8,000km or one that travels via Manchuria, which takes almost a week to complete. I was intrigued by the country that was home of Genghis Khan and well, I didn't know what else, which was part of the reason I was intrigued.

My journey started on a Tuesday night at Yaroslav Station in Moscow. Platform three was packed with traders loading up the train with rugs, stereos, clothes, underwear and a host of other good that I assumed they were going to sell on the way. I expected to see many world wise travellers on the station, waiting to take this epic journey; I saw none. I was the only person who had not brought at least half a carriage worth of goods to sell on the way.

I pushed my way past bags, of what smelt like horse blankets, to find my carriage. The compartment was about as big as the bathroom at my Moscow hotel. There were about eight compartments to a carriage. Each compartment consisted of a small table next to the window and two beds on either side, with a further two that suspended from the sides of the carriage, but stowed in an upright position giving the illusion of some space.There was no one else in the carriage as I went through my ritual of taking of my hat, gloves, coat and the several other layers I was wearing to keep out the Russian winter. It was early January and below -20°C outside. I went into the corridor and looked out the window at the remaining passengers loading their wares. Until I reached Ulaanbaatar in five days' time, this was going to be the way I would see the world. I was torn from my thoughts as I saw several people walk into the compartment behind me. Confusion started as seven people tried to lay claim to the four beds in the carriage. There had been an obvious case of overbooking and we chatted politely as we waited for the ticket collector to see who would be thrown off the train. Luckily no one was thrown off, and three of us were moved to other carriages in the train. I was moved into first class. Still with a toilet at the end of the carriage and no shower, but the compartment had only two beds and I was alone. Not bad for a $200 ticket.

I spent the evening alone in my carriage, sipping strong Russian tea from the Samovar at the end of the carriage. The high rise flats of Moscow turned into countryside dotted with small towns. Russian churches appeared in almost every town, lit up against the surrounding hills covered in snow. Yet there was not enough time to appreciate the beauty before it past by and something else would appear to spark my interest. It was how much of the journey was taken up, looking out the window admiring the scenery. Every morning I would open my curtains to wonder what kind of scenery would greet me as the train moved through the Urals into snow covered forest to step and the large expanses of snowy nothingness. It was hard to get bored of the view and the anticipation of another beautiful sunset; knowing you've travelled almost a thousand miles, and crossed another time zone, since the night before.

The train makes frequent stops to pick up new passengers and let other alight. Ekaterinberg, Omsk, Novosibirsk, Irkutsk and Ulan Ude, near Lake Bikal, are just some of the great cities the train passes through. With the train stopping for only an hour so at each stop there is little time to sightsee except at the station. If you miss the train leaving it can be a week before another one is able to take you to Mongolia to catch up with your luggage.

I chose to stay close to the train and settle with admiring the stations we stopped in as well as trying to avoid the hustle that always met us at stations as traders tried to sell their carriage full of goods.

Old women often came up to the doors of the train offering hot meals of chicken and vegetable or meat and potato, as well as soup and biscuits. A three-course meal could be enjoyed form your window if you didn't want to visit the dining cart that day. Other people would approach the doors and windows of the train, decorated glasses and crystal, paintings, fur hats or whatever was a speciality of the region could found. Many workers in the local factories were paid part of their wages in what they actually produced and the passing trains would be a good source of income in the struggling economy. I often swapped some of my own possessions for snacks; a pair of warm socks got me a huge bag of berries that I could enjoy for the rest of the journey and my book of 2001; a Space Odyssey got me a new pair of gloves.

It was at the end of the first day that someone joined me in the carriage. Elenor was a young mother from Perm who was on her way to visit her sick mother in Ulan Ude. She spoke terrible English, and I terrible Russian; we got along well. We spent the day talking about her children and what I was doing in Russia. She would often tell me how I reminded her of her ten-year-old son, and when I fell asleep on my bed she would often drape her shawl on me and gently sing Russian songs.

Elenor had a supply of shopping bags that she was selling at stations to try and pay for her journey. As the train pulled into another station we would both lean out of the windows waving the colourful plastic bags and yelling "sumki sumki", "bags bags". I never sold many, but then neither did Elenor.

Visitors would often pop into our compartment to talk, bringing gifts of vodka or chocolate. While I only understood part of the conversation, the talks were always animated and very enjoyable. I often moved between carriages to meet other travellers. I would take along my bag of berries as a guest offering. I was keen to experience Russian cuisine and eat the food I found on the stations or in the restaurant car, but I'd also bring my packs of dehydrated meals that I had brought along just in case.

It was a continual source of amusement as we poured hot water into the foil packs and a full meal was ready in minutes. Before leaving the UK I was worried that my Russian would not be enough to help me mix with the other travellers. My language was bad but I was warmly welcomed anywhere I went on the train. I never did meet another Western traveller; I can't say that I minded.

The days passed quickly, too quickly, and the boredom that I had feared never set in. I was hoping to finish my second book and swap it for something at the last station, but I'd hardly read a page or so before my eyes would drift towards the window and I became lost in what lay outside. I had been waiting eagerly to see Lake Baikal, the deepest lake in the world, and Elenor awoke me as we passed it. This huge lake was covered in ice and stretched to the mountains on the horizon, but it disappeared within minutes as the train turned a corner and we headed back into the forest.

We soon arrived at the station in Ulan Ude; this was Elenor's stop. We said our goodbyes and she left me one of her shopping bags to remember her by. I promised to write but after she'd left I realised I never took her address. Sara, the only female doctor in Mongolia (or so she told me) now occupied the other bed in my compartment. A gentleman from Lake Baikal, Valery, also joined us. He talked passionately about the lake and how 'you can catch fish with just your arms' he brought with him food from the region: Caviar, black bread, cured fish, biscuits and other delights that we tucked into eagerly.

The three of us shared stories and swapped English and Russian lessons until we reached the Mongolian border late that evening. The border crossing took almost six hours; we ate and drank numerous bottles of vodka. The border guards were cheery and shared our vodka as they checked our passports. They chatted to us in three languages: English if they were talking to me, Russian when they talked to Valery and Mongolian at all other times. I understood perfectly, or maybe that was just the vodka.

The last night on the train passed quickly and I slept until we reached Ulaanbaatar the next morning. I was hoping to enjoy a last breakfast in the restaurant car and get the chance to say goodbye to many of the people I had met during the journey, but as we got into the station there was just enough time to gather up my belongings before were ushered off the train.

While the Trans Mongolian Route of the railway continued for another 1,600km to Beijing I would not join it for another four days; in that time I would have the chance to look around the capital city of Mongolia. I would then join another train and spend just one more day to complete one of the longest journeys on the planet and get to Beijing. But now I have to swap another pre-packed meal for some proper food. I wonder what it will be like here.

Hello.
If you'd like to chat about the Trans Siberian Express or need help finding a holiday to suit you we're very happy to help. Rosy & team.
01273 823 700
rosy@responsibletravel.com
◄ Map & highlights | Things to do ► 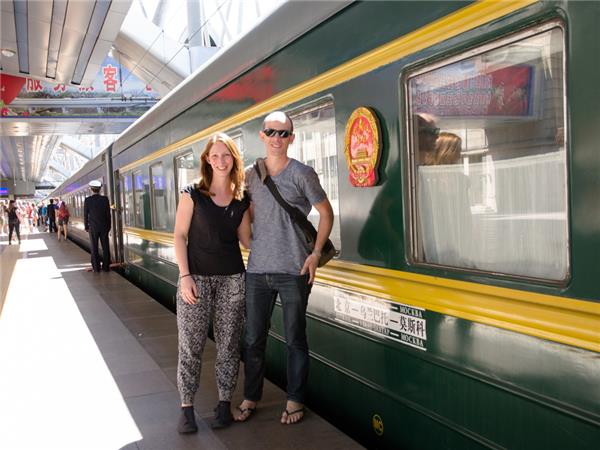 Travel across continents on the greatest train journeys 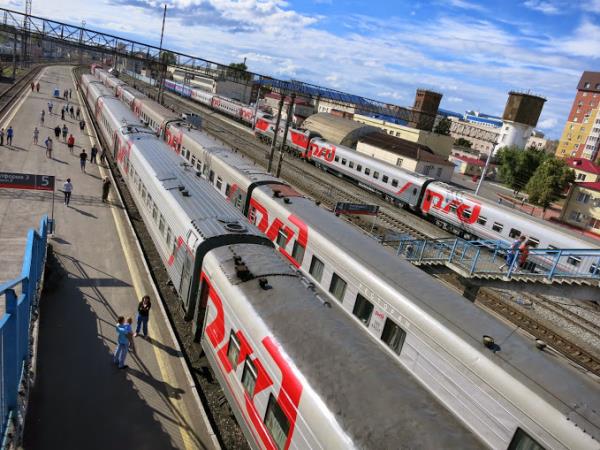 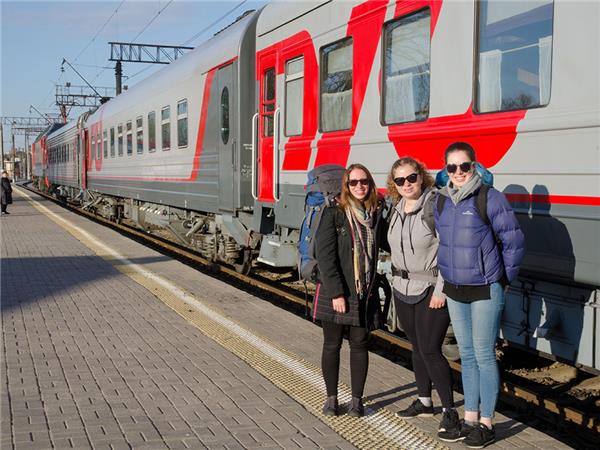 Russia to China on the Trans-Siberian Railway 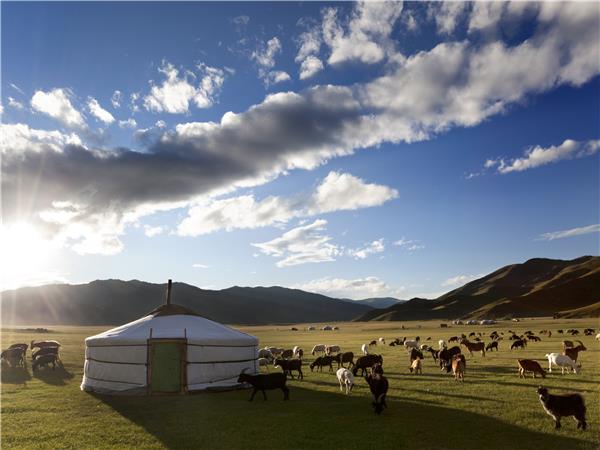 From the Pacific to the Baltic on the Trans-Siberian Railway 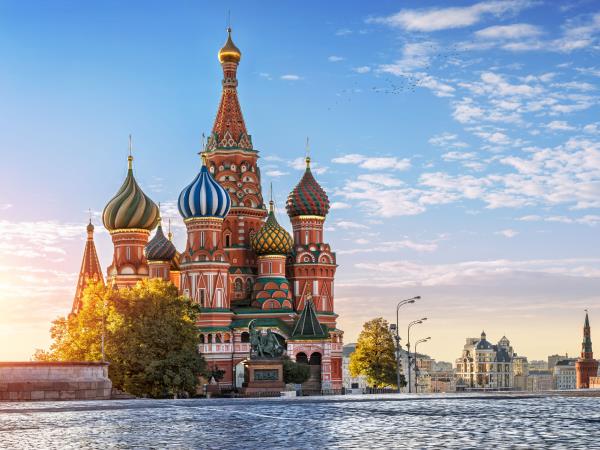 Contact us - call or email Call us from anywhere No queues or automation Sign up to our newsletter
Photo credits: [Page banner: Boccaccio1]
Back to the top