Where to go on the Trans Siberian Express

This travel guide page is all about where to go on the Trans Siberian Express, highlights including: Lake Baikal, Mongolia, and Ulan Ude as well as Trans Siberian railway holidays advice and tips from our friends in Russia and recommendations from those who have done it.

Saint Petersburg, Moscow, Lake Baikal, Ulaanbaatar, Vladivostok and Beijing, when you consider these legendary locations are often mere bookends to the real experience of travelling from Europe to Asia, or vice versa, you know that youve got a really exciting adventure on your hands.
The Trans Siberian route from Moscow to Vladivostok is the longest and runs every other day; the weekly Trans Manchurian takes passengers from Moscow to Beijing via Harbin and requires tracks to be changed when crossing from Russia to China;
finally, the Trans Mongolian also runs once a week and travels
from Moscow to Beijing via Mongolia and
the Gobi Desert. 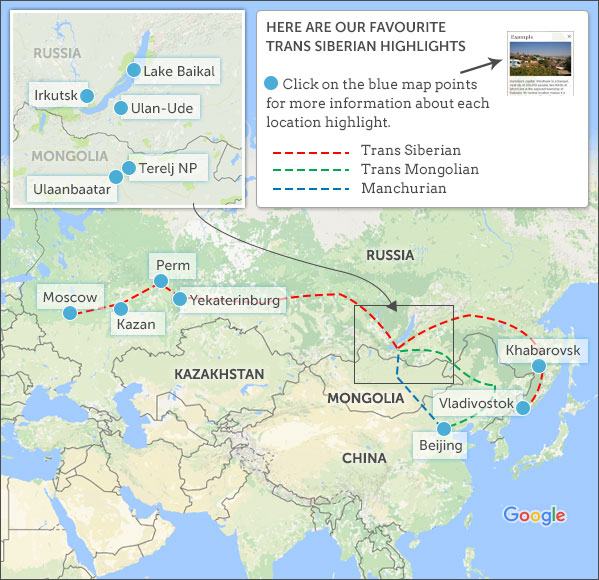 Beijing will send your senses into overdrive with contemporary and classic Chinese sights all set to drop jaws and broaden horizons. Tiananmen Square, the Temple of Heaven and the Forbidden City will leave you in no uncertain terms as to the might of Mao but walk in the pagoda-filled parks or amongst the hutongs or on the nearby Great Wall of China to really take things to the next level.

Just 65kms from Lake Baikal, Irkutsk conjures up cosy coffee houses, opulent-looking orthodox churches and Siberian dairy delicacies at the Central Market with lots of chances to stock up on supplies or fast food on the ubiquitous Karl Marx Street. A sightseeing tour should include the Church of Exaltation of the Cross, Decembrists Museum and the Angara River embankment.

Situated where the Volga and Kazanka rivers converge, Kazan is about 12.5hrs east of Moscow by train and renowned for its UNESCO-listed kremlin as well as the magnificent Raif Monastery. Several beautiful churches can be found on a guided walking tour of Kazan with the pedestrianised Baumana Street flanked by pastel-coloured facades to welcome shoppers onto the multi-coloured Alley of Tatar Stars.

Just 30kms from the border with China, Khabarovsk is an extremely attractive city based along the banks of the River Amur. During the summer youll find several pop-up cafes and tented bars along the river promenade, and in Dynamo Park, whereas winter months make way for ice sculptures, hot chocolates in the Vyborg Market and chances to keep warm in the museums aligning Shevchenko Street.

Lake Baikal is one of Siberia's natural highlights and staying in a guesthouse or with a family in Listvyanka or on Olkhon Island helps you get even closer to the shoreline. Enjoy boat rides and trekking in the summer or ice skating in the winter. Check out the east coast beaches which attract fewer tourists and can be reached from Irkutsk or Ulan-Ude. Avoid illegally caught omul fish.

Although the capital of Russia is a somewhat daunting prospect in the depths of winter its still an experience not to be turned down lightly. Gorky Park, Saint Basils Cathedral and Lenin's Mausoleum all make for intriguing treats and ensuring you have at least a day or more to explore before boarding the Trans Siberian Express is definitely a great way to start as you mean to go on.

One of the first cities youll find after Moscow is Perm which sits on the banks of the River Kama and boasts one of Russias finest theatres for opera & ballet as well as a couple of excellent art galleries and plenty of restaurants and bars overlooking the water. Soviet architecture, summer festivals and the inspirational setting for Doctor Zhivago  what more could you ask for 19hrs east of the capital?

Sections of Terelj National Park have been set aside for ger camps and although the experience is slightly more permanent than nomadic it's still great fun just 60km from Ulaanbaatar. Aside from nights under the stars and around the fire, wannabe Mongolian warriors will have the option of horseback riding, archery, trekking or just enjoying time spent amongst the rolling Mongolian steppe.

Mongolia's capital is often the penultimate stop for travellers on the Trans Mongolian train bound for Beijing which is why it's well worth disembarking for sightseeing and stocking up on supplies prior to the 30-hour journey into China. Monuments to socialism, Buddhism and, of course, Genghis, will all be pointed out on a guided tour, although people watching in Chinggis Square is often equally as enlightening.

100km south of Lake Baikal, Ulan-Ude is the capital of the indigenous people of Siberia, the Buryat, and, as such, provides unique insight into the region's cultural heritage which is intrinsically linked to nature and Buddhism. A walking tour will also unearth a huge head of Lenin, a massive open-air architectural museum and a Siberian baroque cathedral; all just three and a half days from Moscow.

The birthplace of Yul Brynner, no less, is packed with parks, ports and sheltered bays where local people flock during the summer against the backdrop of Mount Kholodilnik. As the final stop on the Trans Siberian Express route, Vladivostok is well-worth a glimpse with the view from Eagles Nest Hill offering the best chance of seeing the, often polluted, city from above.

The Ural Mountains and wooded hillsides surrounding Yekaterinburg are tempting for those who have the time although its usually a historic tour of the city centre thats better suited for train passengers. The Cathedral on Blood, Nevyansk Icon Museum and the beautiful facades of both the current and old railway stations take the plaudits with views from the top of the business centre, not to be missed.

Hello.
If you'd like to chat about the Trans Siberian Express or need help finding a holiday to suit you we're very happy to help. Rosy & team.
01273 823 700
rosy@responsibletravel.com

TRAVEL TIMES ON THE TRANS SIBERIAN

The following give you a rough idea of travel times between the main stations on the Trans Siberian. Don't forget, although the train passes through seven time zones, all train timetables are set to Moscow time.