Culture may not be top of mind as one of the most pressing reasons to visit Australia, but there is a thriving arts community in both Perth and Broome, one of UK artist Antony Gormley's largest outdoor sculptures near Kalgoorlie and a growing music scene in Fremantle, all waiting to be discovered.

The growing revival and interest in indigenous culture is also reflected in the growing number of aboriginal tours and events showcasing everything from dreamtime storytelling to the visual arts.

The world renowned British artist, Antony Gormley, has fused nature and art in a display of 51 black steel statues scattered across seven square kilometres of the vast, flat salt lake. The sculptures appear ghostlike on the horizon, shimmering like mirages in the heat. They are located one and a half hours' drive north of Kalgoorlie, and 55 kilometres from the outback town of Menzies. You can also reach the site by following the Golden Quest Discovery Trail and trace the history of some of Australia's greatest explorers along the way.

Kings Park & Botanic Gardens
Located on the Mt Eliza escarpment with panoramic views over the city of Perth and the Swan River, Kings Park and Botanic Garden covers an area not far short of 1,000 acres (400ha).

The location of the park has been sacred to the indigenous Nyoongar people and a central location in the Aboriginal Dreamtime for tens of thousands of years. Known as Kaarta (hill/head) Gar-Up (water-place of), it was used as a place of ritual and marriage, shelter, and for the gathering and hunting of food.

His tours look at the land from an aboriginal point of view and explore the ancient traditions of the local Malgana and Nhanda people including local bush tucker, medicinal plants and indigenous languages, spear and boomerang throwing, animal tracking and dreamtime stories.

Fremantle Prison was granted World Heritage listing in 2010 thanks to its important and fascinating role in Australia's convict history. When the first convicts arrived in 1850 as a labour force to help construct infrastructure for the Swan River Colony, which later became the city of Perth, one of their first projects was to construct the convict establishment that was to become Fremantle Prison. It was in continuous use for more than 140 years still being used as a high-security prison right up until 1991 when it was shut down, restored, and then reopened the following year as an historic site and museum.

Tours of the prison include a 'Great Escapes' Tour which includes the story of one of the prison's most infamous prisoners, 'Moondyne Joe', who escaped on numerous occasions; the 'Tunnels Tour' in hard hats and headlamps exploring the labyrinth of tunnels under the prison dug by the prisoners as a water source; and the 'Torchlight Tour' featuring stories of ghostly happenings, solitary confinement cells, the whipping post where prisoners were flogged with the cat o' nine tails, and the gallows where the last prisoner was hanged in 1964.


Ngilgi Cave, Yallingup
Ngilgi Cave formed over hundreds of thousands of years beneath the limestone ridge which forms Cape Naturaliste near the town of Yallingup at the northern end of the Margaret River region.

With its mesmerising display of stalactites, stalagmites, helictites and shawl formations, aeons in the making, it has been a major tourist attraction ever since it was first discovered by Edward Dawson in 1899. Ngilgi is approximately 500,000 years old and is technically known as a 'stream cave' formed progressively through the abrasive and corrosive effect of water.

As passages widened, stresses were created in the overlying limestone resulting in many collapses which have either settled or been gradually broken down by the action of water.

Ngilgi Cave is associated with an aboriginal legend as told by the Wardandi people. "Ngilgi, a good warrior spirit, lived near the sea and Wolgine, an evil spirit, lived in the cave. Concerned for the welfare of his people, Ngilgi gathered together the spirits of the waves, lightning, rain, thunder and wind and they created a huge storm.

"Ngilgi attacked Wolgine and he gradually drove Wolgine back through the cave. So fierce was the battle that a tunnel collapsed, cutting the cave off from the sea. The collapsed tunnel can still be seen today as a deep gully a short distance from the cave. Eventually Wolgine was driven up through the earth creating the present entrance. Wolgine was banished from the cave and Ngilgi claimed it as his own and thus the cave became known as Ngilgis Nurilem (cave)." 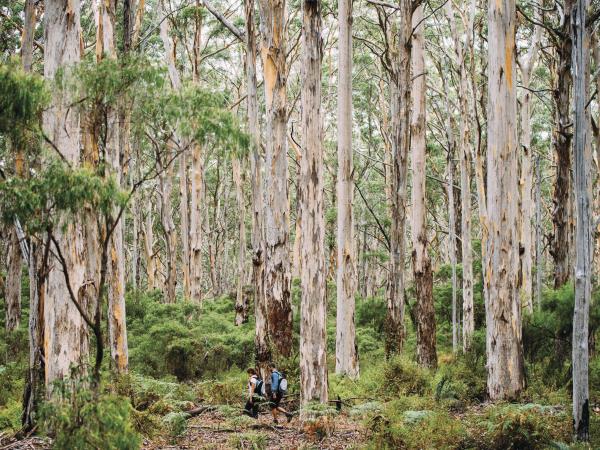