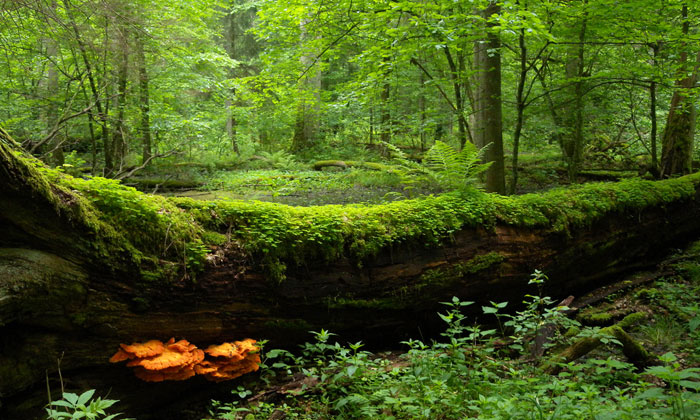 
The whole of northeastern Europe was once covered in dense, temperate, primeval forest. Its value was recognised early, and sections of the forest were protected as early as the 1500s when hunting reserves were declared by kings and tsars in order to protect the resident bison. However, during the 20th century and in particular the wartime occupation of Poland, vast areas of the forest was logged and the deer, wild boar and European bison  unique from their American cousins  were hunted for food. The last wild bison was killed in 1921.

Today, most of the original forest has disappeared, and Białowieża Forest, which spans parts of Poland and Belarus, is one of the largest remaining tracts. In 1979 this hugely biodiverse habitat was designated a UNESCO World Heritage Site; it is now also a Polish Biosphere Reserve and an EU Natura 2000 Special Area of Conservation. Part of the Polish section is also protected by the Białowieża National Park; some of the ancient woodland here has remained untouched by humans for over eight centuries. More impressively, despite their extinction in the wild, several bison were kept in zoos across Europe. Breeding programmes and close collaboration meant that in the 1950s a herd was reintroduced to Białowieża, and there are now some 900 bison living wild in the forest. This is the largest herd in Europe, and a draw for wildlife tourists who can track them on carefully organised tours.

Astonishingly, the Polish government has now sanctioned logging in Białowieża Forest  defying bans by UNESCO and the European Court of Justice, and tripling the amount of logging allowed. Activists and journalists working to save the park have been treated aggressively, and ancient forest is being lost by the day  including oaks that have stood here for over 450 years.
Take action!
Whats the name of the campaign?
Save Białowieża, Polands last primeval forest!

Tell us about your campaign in a nutshell
There is nothing quite like Białowieża Forest in Poland, one of Europes last primeval forests. Untouched by humans for centuries, it is a treasure trove of biodiversity. The forest is also the habitat of 900 bison  the largest wild herd on the continent. But the government of Poland allows logging of this precious forest, a UNESCO World Heritage Site since 1979. 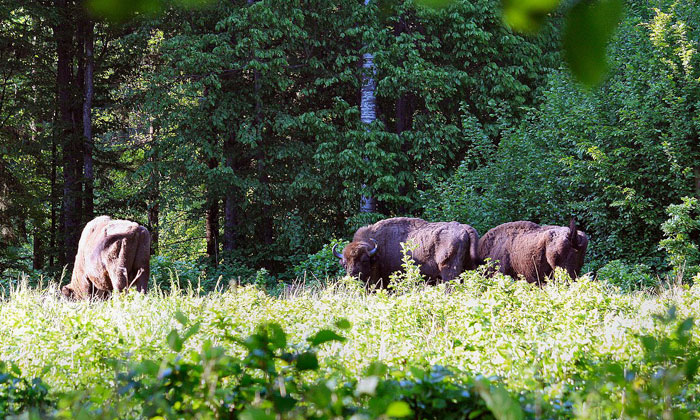 What inspired this campaign?
Scientists and conservationists from Poland and other European countries oppose logging in Białowieża Forest and are committed to preserving it. Despite the strong opposition, the Polish government responds with violence.

Share with us a story about a person / place / animal that's currently getting a rough ride because of these issues?
For weeks, protesters and environmentalists from Poland, the Czech Republic, Slovakia, Germany, the Netherlands and Australia stay in the Białowieża Forest, aiming to stop the commercial logging. On July 25th 2017, another protest took place near Nowosady (vicinity of Hajnówka). Harvesters were logging old-growth forest, not planted by man, dominated by old alders and spruces, with many oaks even over 180 years old. Timber extraction was conducted in the 3rd UNESCO zone, where logging is banned by law. Forest guards and the police show less respect to the protestors and disregard their safety. There was an attempt to run over one person with a forwarder, and a journalist has been attacked.

What change needs to happen to make things better?
The protests have not been successful so far. The Polish government answers with violence and even ignores the logging ban by UNESCO and by the European Court of Justice. According to the Court of Justice, the increased logging can cause serious and irreparable damage to this priceless piece of nature. Therefore saws and harvesters have to stop their work immediately. What is needed is more pressure on the Polish government, and also a revised forest law in Poland, because since the new forest law became valid, logging has increased threefold.

How will the world be a better place if and when you succeed?
One of the last old forests in Europe will stay alive and preserve biodiversity for the future of humankind.

Is there one person who figureheads this campaign? If so, tell us about them and their inspiration and aspirations.
No, but there is a broad coalition of Polish environmentalists and scientists, supported by many NGOs from other countries.

What things can we all do to help?
1. Spread the word and ask your local media to contact us, to put the forest devastation in the spotlight.
2. Sign our petition.
3. Come to Białowieża and join the protests.
4. Visit the forest and national park to show the Polish government that the economic impact of tourism is greater and more sustainable than that of cutting down the trees.

Do you have a target end date for this campaign?
No, its ongoing.


Take action!
Responsible Travel's view
“
Białowieża is one of Europes most ancient forests and an immensely biodiverse habitat. One naturalist has compared it to a coral reef due to the number of species that thrive here. The Polish governments tripling of the amount of logging in Białowieża defies international law and threatens this delicate ecosystem  not just the bison which were so carefully reintroduced, but also the plants, insects, spiders and birds. Once the ancient trees are gone, no amount of reforestation will ever be able to restore the Białowieża Forest.
”
Written by Vicki Brown