This Georgia cultural holiday takes you on a journey that is not only as complex and exciting as a Greek myth, but is also to the actual home of many Greek myths. Once known as the Kingdom of Colchis, it was the sought after destination of Jason and the Argonauts, and also the home of Medea. With dramatic backdrops such as the Caucasus Mountains and the Black Sea as well as a culturally rich cast of ethnic groups going back to ancient times, it is truly one of the hidden gems of Europe.

This two week holiday takes you on a cultural circuit starting in the charming capital of Tbilisi, which straddles the Mt'k'vari (Kura) River and is nestled in the shadow of the South Caucasus. From here we go through prolifically forested valleys and omnipresent snow capped mountains, stopping at ancient villages, cave towns and Svaneti cultural hubs along the way.

Some of the cultural highlights in this itinerary include Georgias extraordinary sacred sites such as Mtskheta, one of the oldest cities in Georgia dating back to 3 BCE and still the centre of the Georgian Orthodox Church. Also the UNESCO World Heritage site at Gelati Monastery, one of the largest medieval Orthodox monasteries in Europe, this was a vital centre of culture in ancient Georgia. The cave town of Vardzia is also an extraordinary place to visit, with its monastery carved into the slopes of Mount Erusheti.

We will also visit the town of Gori, birthplace of Joseph Stalin, and explore the stunning Upper Svaneti region in the North West. Not only is this dramatic mountain terrain, with deep gorges and permanent glaciers, but it is also home to ancient Svan cultural heritage, where the Svani people are famous for their polyphonic singing, medieval towers protruding from remote mountain villages and inimitable hospitality.

The price of this holiday includes accommodation, meals, and activities as per itinerary, bottled water, all activities, tour leaders, transfers, entrance fees and local expert guides. 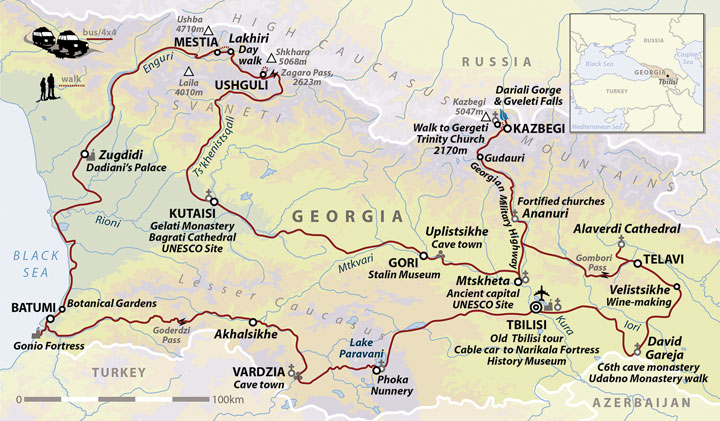 Almost everything in Svaneti - the scenery, the towers, the walks and watching the film 'Dede' in the world's cosiest cinema

the time in Vardzia was a very close second

Read the instructions! It is partly a walking holiday, so those who don't want to walk may have to amuse themselves. And take less luggage! The guide and driver were left to carry cases up and down stairs.

At the ethnographic village near Zugdidi and at Vardzia we felt as though our visit benefited new enterprises combining farming with tourism. We were happy to stay in family-owned accommodation wherever possible. But driving more than 2000km cannot help the environment.

One of the best. We enjoyed almost everything. The guide in particular was outstanding. We are hoping to return to Georgia and to visit Armenia.

We have a strict environmental policy to make sure that the environments we visit are not damaged or spoilt in any way. Our Leave No Trace ethic is applied to this trip and as tour operators, it is something we are careful to promote. Your guide on this trip will have been trained to uphold this policy and all clients are fully briefed on appropriate/responsible behaviour whilst in wilderness areas.

We are very aware of the economic, ecological and ethical impact tourism can have on ancient cultures and fragile environments. We realise that taking clients through this region can have a negative impact on the environment if not handled responsibly and as such, on all of our trips we go to great lengths to minimise the negative and accentuate the positive - after all, there are also many good things that the traveller can bring. There is a great focus on enjoying the personal and environmental benefits on walking on our Georgia Explorer tour, and we will enjoy many hours exploring the countries natural wonders by foot.

By keeping the group size to a maximum of 12, we can also minimise the human impact on the fragile sites we visit  particularly important as this trip visits some delicate ecosystems.

Responsible travel and sustainable tourism are fundamental ideas that we have been committed to since our birth. It is our strong belief that these words should not be simply tagged on to dossiers and websites but should be at the very core of each trip, and our adventures are therefore designed with the local people, culture and eco-system in mind. We believe that a successful trip not only delivers a unique and unsurpassable journey for our clients, but that it also benefits the peoples whose lands we are privileged to visit.

Fully integrating with the local community in such as way as staying in local guesthouses, as we do on 4 nights of our Georgia Explorer tour, allows us to gain a real insight into their lives. In another way, part of the trip provides the opportunity to buy local handicrafts, which not only helps to keep unique skills alive, it also is another way to support their livelihood and thus the local economy. In this way, you can ensure that money goes directly into the hands of the local community. Not only does this allow local people and visitors to interact and learn about each others culture, it also allows visitors to make a meaningful connection with local people, and ensures that the revenue generated by tourism goes directly to local communities. 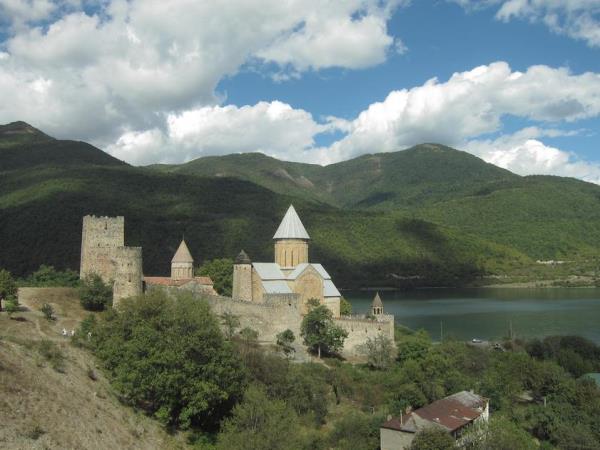 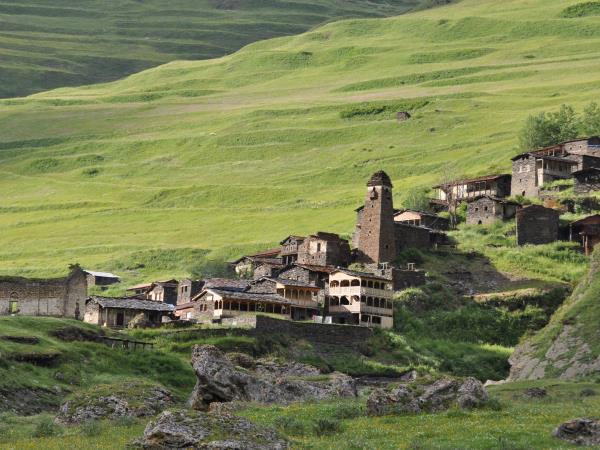 Get off the beaten track in Georgia