Note: Both of the self guided cycle tours below can also be undertaken on an electric bike.

If you're thinking about self guided cycling, Portugal is a fantastic place to start. There's just such a rich variety of landscapes ranging from the coastal tracks overlooking the Atlantic to the fig, orange and almond groves to be found where the Algarve meets the Alentejo region.

Self guided cycling Portugal allows cyclists to delve deeper into the history and culture of lesser-visited areas with out of the way fishing villages and medieval towns offering all manner of authentic local produce alongside a laid back ambience and welcoming atmosphere.

Vineyards and wine cellars can be found across the countryside with market towns such as Loule providing an excellent example of traditional life as well as the perfect start point from where to cycle the peaceful inland roads towards the village of Alte with the famous fresh spring water at Fonte Grande and Fonte Pequeno, prior to heading onwards to Silves situated on the banks of the Arade River.

Self guided cycling Portugal is just as much about relaxing and absorbing the surrounding countryside as it is about putting in the pedal power with the citrus orchards and natural hot spas of Caldas de Monchique in the Algarve providing a great chance to reinvigorate tired limbs.

As this eight day tour heads way out west cyclists will find themselves overlooking the high rollers of the Atlantic as they enter Aljezur and the fantastically wild and untamed beaches of Costa Vicentina Natural Park. This is a real paradise for bird watchers and nature photographers, and any artists hoping to capture the essence of self guided bike tours Portugal should look no further for inspiration.

As this tour comes to a close you'll be treated to the sandy shoreline and clear blue grottos of southern Portugal with afternoons spent swimming, snorkelling or just lazing at the beach matched only by some superb cycling routes and grilled fish suppers at sunset.

Note: On average this self guided cycling Portugal itinerary clocks between 32 to 54kms per day with ascents taking cyclists no higher than 400 metres above sea level.

The southern half of Portugals Alentejo region, known as the Baixo-Alentejo, is a real joy to behold with undulating waves of golden wheat decorated with white washed towns and fortified Moorish castles.

This self guided bike tour Portugal itinerary offers the very best of the Baixo-Alentejo before heading south into the Vale do Guadiana en-route to the traditional seaside village of Cacela Velha in the Algarve, just over the border from Spain.

A blend of culture, history and naturally beautiful landscapes; with agricultural fields and sprawling wine estates providing a continually changing backdrop for cyclists.

The start of this suggested eight day tour is the sleepy hillside town of Serpa in Baixo-Alentejo where narrow white washed alleyways lead to small stores selling delicious locally made cream cheese to start your Portugal self guided cycling tour off in style.

Next stop on this Portugal self guided cycling tour is the town of Mertola where you'll be based for the next two nights in a comfortable hotel which has been built on Roman ruins and features a beautifully-designed glass floor so guests can study the archaeological site below. Roman and Moorish influences are everywhere in Mertola and the set cycling route around the town offers every opportunity to soak up the cultural heritage as well as the naturally preserved habitat for black storks and blue magpies.

Leaving the Baixo-Alentejo region, but staying within Portugal, self guided bike tours follow the River Guadiana south before reaching the town of Alcoutim in the east of the Algarve. Optional ferry rides over the river and into Spain are easily accessible from here and give cyclists a chance to stretch their legs and explore the Spanish town of Sanlucar de Guadiana, famed for its castles, palaces and locally produced sherry.

The tour then continues south where the salt plains and protected marshlands of Sapal de Castro Marim nature reserve provide bird watchers and wildlife lovers with an absolute treat for all the senses.

The final two nights of this tour will be spent in the Algarves picturesque coastal village of Cacela Velha which boasts some superb views over Parque Natural da Ria Formosa as well as opportunities to cycle along the Ecovia bike trail or go for a stroll along the coast.

Note: On average this self guided cycling tour of Portugal clocks between 34 to 62kms per day with a few mild ascents taking cyclists no higher than 200 metres above sea level.

2 minute summaryMap & highlights
Given that nearly all Portugal cycling holidays are tailor made and designed so that you can get yourself from A to B, it shows how well set up this w...

2 minute summaryBest time to go
Flop off a flight to Faro and you'll find time shares and green fees but explore inland or along the southwest coast and the Algarve opens up to patte...

Every days cycling was memorable but I guess what will stay in the mind longest will be arriving at Cabo de Sao Vicente the most south westerly point of mainland Europe and looking over the sea battered cliffs at the Atlantic ocean. Read full review

Bert gave us a most varied route which gave wonderful views and varied terrain. His route instructions were spot on. Read full review

The most memorable part of the holiday was approaching picturesque towns from a distance after several hours of winding our way through small roads and alongside orchards. Read full review

The peace and tranquility of cycling through the countryside and stopping off in small village cafes for a coffee and snack was one of the most pleasurable aspects of our trip. Read full review

The most memorable part of the holiday was that at the end of a day riding, arriving at accommodation which far exceeded our expectations, both in terms of the standard of accommodation and its location. Read full review

This holiday met and surpassed our expectations. It was successful on all levels. Read full review

The smells of eucalyptus and orange groves were memorable. The walk at Carrapateira was something we will never forget and showed how the local people are preserving that environment. Read full review

Reviewed on 05 Jun 2018 by Kathleen Georgopoulos

We would highly recommend this holiday and you cant beat the price. Read full review

The riding was excellent on quiet picturesque roads. The spring flowers were in full bloom. The weather was perfect and the small towns and their accommodations were lovely. Read full review

We got up in the morning had a great breakfast and onto our bikes-all we had to do was appreciate the beautiful scenery and decide where to stop for coffee. Lunch was a picnic along the way and with nothing else to think about, it made for a very relaxing holiday. Read full review

Waking up each morning to a new adventure, and not quite knowing what was in store. Read full review

Silves Castle and Silves itself was definitely the most memorable. And the hills. Oh my, the hills. Read full review

Reviewed on 26 Mar 2017 by Benjamin Cartwright

Arriving in Carrapateria, the beaches were beautiful!! All the rides had wonderful scenery, lovely small towns to explore and the rides were challenging yet fun and gave us a sense of accomplishment at the end of the day. Read full review

The variable surroundings we were in on any one day. The surrounding hills of the Algarve, The beautiful rugged South and West coast. The sunset and sunrise on Salema beach. The Portuguese tarts! Read full review

Everything was great. The accommodation and the recommendations for restaurants was outstanding. Read full review

The whole cycling trip was memorable as we got to see the real Algarve with its variety of landscapes - from mountains inland to the west and south coast - often away from the tourist hot spots. Read full review

Cycling through the countryside is a wonderful way to reduce your environmental impact while at the same time maximizing your experience with local flora and fauna. Everyone we encountered was so friendly and helpful. We found the directions to be explicit and easy to follow and appreciated the many routes that took us off the beaten path. Read full review

Very good. I would, and already have, recommended Responsible Travel to people. Knowing that having a very enjoyable experience supports local communities makes it so much better. Thanks once again. Read full review

We had a great time. All six of us enjoyed the rides, and think the perspective we enjoyed from the seat of a bike was special. Read full review

The whole week was very memorable as it was so varied. Burt has put a lot of thought into this holiday and has made it very personal. We really liked the various options of rides that were given for each of the days (pending fitness, weather, mood etc... Read full review

Top notch...Cycling through orange groves in the sunshine and stopping to feast on big juicy oranges was the most memorable part.... Fantastic scents from the forests of warm eucalyptus will always remind us of Portugal. Read full review

The range of beautiful places that you visit - cycling through gorgeous countryside with orange trees all along the way, stunning beaches, pretty villages, interesting towns and bright blue skies every day. Read full review

We enjoyed the riding through the hills and the extra trip out to the lighthouse and westernmost part of Portugal. Terrific! Read full review

The best part of the trip was following the route maps through the beautiful Portugal countryside. We had a chance to explore areas we would never have found on our own!. Wonderful trip in all aspects! Read full review

On our Portugal cycling holidays we encourage guests to visit their information & exhibition centres, keep to the recommended paths, take nothing but photographs and leave nothing but footprints.

We always use local services and accommodation such as small hotels and wherever possible turismo no espaço rural which offer rural accommodation run by local families. On these Portugal cycling holidays we work exclusively with small local businesses and use locally owned restaurants. In this way we help to conserve a rural lifestyle and contribute to the overall sustainable development of the region.

We encourage our guests to be environmentally aware and act in a proper, responsible manner at all times. Information, tips and recommendations on the life and customs of the local people are given to all clients on the Portugal cycling holidays.

As much as we can our office recycles waste and we use recycled products whenever possible. 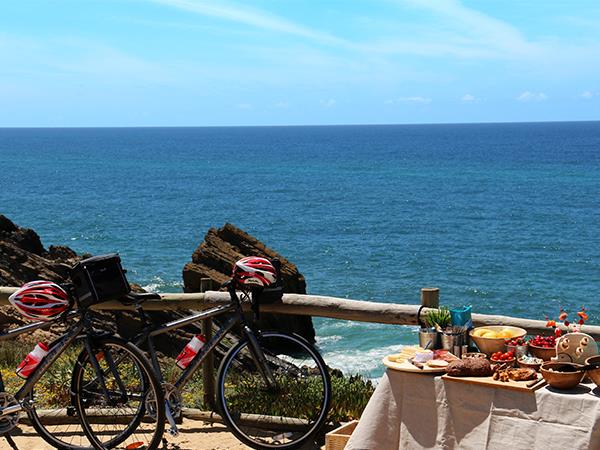 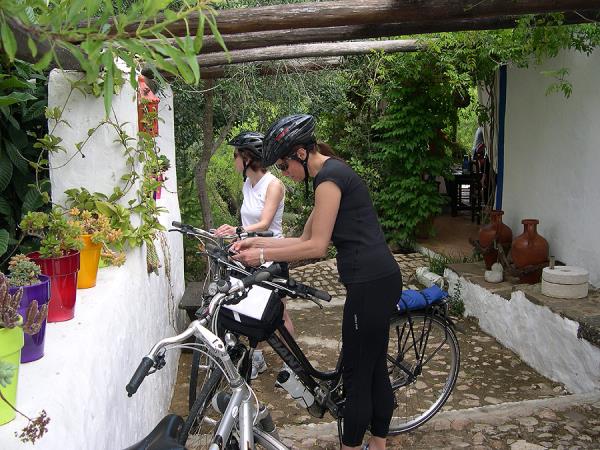 Cycling holiday in Portugal, self guided

A leisurely cycling holiday in the Algarve 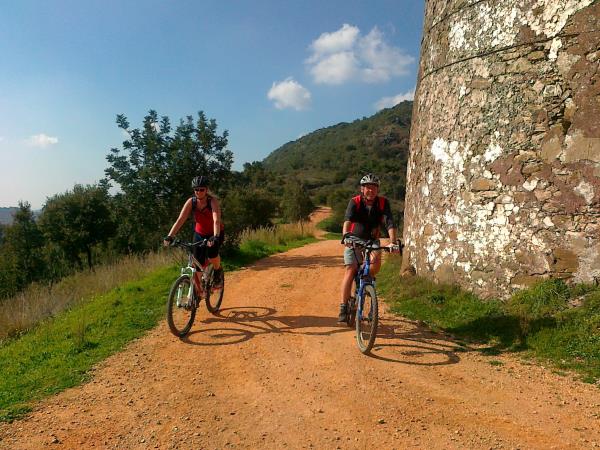 Dramatic coastline to picturesque countryside in the Algarve