Responsible tourism in the Annapurna Circuit

The Annapurnas mountains may look invincible, but they arent impervious to the strain of thousands of trekkers  and neither are the local communities which live among them. We delve deeper into the issues facing the region  from porters rights to waste disposal  and what the Annapurna Conservation Area Project is doing to protect it. Read on for more tips on what you can do to ensure more responsible tourism in the Annapurna Circuit.

Responsible tourism in the

You wont be surprised to discover that Annapurna, or Annapoorna, is the Hindu goddess of food and nourishment. And trekking the Annapurna Circuit certainly nourishes the soul. But we need to be careful were not feasting too much and too greedily on the natural bounty of this region. The might of the Annapurnas beauty belies its fragility and while these towering mountains may have an aura of impenetrability, they are not impervious to the strain of the footfalls of over 76,900 trekkers annually. Tourism is the second most important industry in the Nepali economy after agriculture, and in the Annapurna it has become a lifeline. There is hope, however, in the form of the Annapurna Conservation Area Project which is successfully engaging local communities in managing tourism, developing sustainable agriculture and protecting Annapurnas forests at grass roots level.

Like the mountains themselves, Nepals porters have an air of invincibility  almost-superhuman athletes able to carry huge loads for hours on end in little more than flip-flops and a T-shirt, over some of the worlds toughest terrain. And yet porters are in fact very human and very vulnerable; usually poor farmers from more lowland areas, who have taken on this back-breaking work as a means to support their families  and will not necessarily always be accustomed to life at high-altitude in harsh mountain conditions.

Local people in the villages surrounding the Annapurna Circuit are dependent on the revenue brought in by trekkers  through teahouses, selling handicrafts and work as porters and guides. However, just because many poor Nepalese from rural areas are desperate to work to support their families it doesnt mean they should be forced to do so at great risk to themselves, and for as little remuneration as possible.

Porters are four-times more likely to suffer an accident on a trek than the trekkers themselves and working conditions for porters in Nepal are among some of the most difficult and dangerous in the world  with multiple days spent at extreme high-altitude, in changeable weather and across challenging terrain. The Trekking Agents Association of Nepal and the Labour Union of Nepal have recommendations for porters pay  to which any responsible tour operator should adhere  but treating porters fairly in the Annapurna goes beyond simply paying them a fair wage. It means ensuring they are fully-equipped, fed  and insured  for the trek they will be undertaking on behalf of their clients. Half of those who perished in the 2014 disaster on the Thorong La pass were Nepali porters, cooks and guides, and reports from the scene described many as lacking warm, waterproof coats or boots  which most cant afford to buy  instead freezing to death in casual clothes, flip-flops or trainers.

It is imperative that porters, guides and trekking staff are insured by the employing tour operator for medical emergencies, helicopter evacuations and even  as was unfortunately the case in 2014  death. In a country with no social security, no disability benefits, if a porter is injured and unable to work, their family, quite simply, goes hungry.
What you can do
Everybody who treks the Annapurna has a responsibility to ensure their porters – and other local support staff – are treated fairly. Here at Responsible Travel we choose the trekking companies we work with in Nepal based largely on their treatment of their sherpas and porters. You know that by booking an Annapurna Circuit trek through us that we’ve already done the leg work (no pun intended) to ensure the local Nepalis who will be carrying your bags will be treated fairly and with respect.

Feel free to ask your own questions though, companies which work tirelessly to support porters’ rights will be more than happy to share the finer details of how they do this with you. Does the tour operator pay a fair wage? Provide porters with three meals a day? Carefully check the amount of weight porters can carry and ensure it does not exceed maximum limits? Do they ensure porters have suitable clothing and footwear for the trek?

If you see or experience something that you feel uncomfortable about then make it clear to your tour company that this is not acceptable, and please report any concerns to us as soon as you return home. Find out more in our article about porters' rights when high altitude trekking.

A mountain of waste

Tourism along the Annapurna Circuit is well established. Teahouses, as well as the ubiquitous dal bhat and noodles, also serve snickers bars, bottles of beer and coca-cola. Add in trekkers bringing their own snacks, thousands upon thousands of squares of toilet roll and you wont be surprised to hear that sometimes the view in the Annapurna is not as pristine as is touted. Remote villages lack adequate waste disposal services  and rubbish either needs to be burnt (not ideal for the mountain environment) or carried out. Or in some cases simply hidden from view rather than managed properly. Even biodegradable waste takes a long time to decompose in the harsh, high mountain environment.

It is estimated that an average trekking group of 15 people generates about 15 kgs of non-biodegradable and non-burnable garbage in 10 days trek, producing tons of garbage in mountain regions annually.  Tourism Concern

And its not just crisp packets and chocolate bar wrappers that are difficult to dispose of responsibly. Thousands of trekkers each year produce other, more human, types of waste in a region without the sewerage infrastructure in place to treat it safely.
What you can do
Carry a refillable water bottle  and use water purification  rather than buying bottled water. Technically bottled water is banned in the Annapurna but this seems to be little regulated. Water purification is readily available from outdoor stores and easy to pack into your daypack  ranging from tablets to sterilising pens and bottles with inbuilt purifying straws. The Annapurna Conservation Area Project (ACAP) has also set up safe water drinking stations along the route to protect local communities from waterborne diseases and help reduce litter from trekkers plastic bottles and most lodges will refill water bottles with hot, boiled water for a small charge.

Even where rubbish bins  put in place by ACAP  exist, the challenging road access means waste disposal and recycling is difficult and expensive. Leave as much packaging at home as you can  and pack as much litter out as you can carry. If you have space in your rucksack then pick up what you can and carry that with you too until you reach Pokhara or Kathmandu where it can be disposed of responsibly. If youre offered a plastic bag with any purchases on the way  on your rest day in Manang for example  politely refuse, reuse any bags you have with you and buy food at local markets to avoid packaging.

A new road through the Annapurna

And no, were not talking figuratively here. Over the last decade there has been considerable investment into the construction of new roads linking the remote villages in the Annapurna region. There is now vehicle access as far as Manang in the east, and Muktinath  just after the Thorong La pass in the west.

While trekking purists bemoan the loss of isolation that was once the Annapurnas calling card  and a proliferation of dust from the trucks and jeeps traversing the gravel  we need to be circumspect about the new roads. Should we, as tourists, lament something that could have a hugely beneficial impact on previously cut-off communities? Certainly the roads offer more reliable, quicker  and cheaper  access to goods, services and medical care.

There is a worry that the new roads will destroy some of the trekking tourism on which the newly-connected villages depend  however that in itself depends on hikers attitudes. The Annapurna Circuit remains one of the most beautiful treks in the world  albeit changed from its original state 10 years ago  and new trails have been way marked to take trekkers off the dusty roads and to retain that ultimately irresistible feeling of remoteness and isolation. And with so many here reliant on the trekking industry the regions residents need us to embrace the new Annapurna and not simply look back at its past glory.

Andrew Appleyard, from out leading Nepal trekking specialists Exodus Travels highlights one of the benefits the roads bring to local communities: When you come across the roads you see quite a few school children using them  rather than a maybe 8km or 10km walk to school they can now travel by vehicle.

Youll likely first hear about the Annapurna Conservation Area Project (ACAP) when you discover you need to pay around US$30 for one of their permits to start the Annapurna Circuit trek. Its perhaps, at first, an unwelcome introduction, but the more you learn about ACAP the less you will come to begrudge this charge  and the more youll understand its pivotal importance in the protection and preservation of one of the worlds most beautiful mountain regions.

Launched in 1986 and part of Nepals National Trust for Nature Conservation, at 7,629km2 ACAP is the largest protected area in Nepal and the first designated conservation area. The organisation protects 1,226 species of flowering plants, 105 species of mammals, 518 species of birds, 40 species of reptiles and 23 species of amphibians. The entry fees paid mean ACAP is self-funding, although it does receive support from other organisations including the World Wide Fund for Nature (WWF).

ACAP has been applauded for its community-focussed approach to conservation, with local people seen as the main beneficiaries of the project and playing key roles in the management, decision-making and implementation of the work it does. It plays a key role in promoting environmental education in local villages, in tourism management and resource conservation and recognising that the breakdown of traditional social structures often leads to environmental degradation, works hard to support and strengthen the regions cultural integrity in the face of tourism, increased road development and modern agricultural practises.

Thanks to ACAP lodge owners are able to access training and small scale, low-interest loans allowing them to invest in solar heaters and efficient stoves, while forest destruction for firewood (wood fuel consumption for trekkers, for example, is double that of the local population  putting huge pressure on local forest resources) is being tackled with a network of kerosene stores and hydroelectric generators. The project also sets fixed prices for the areas lodges to ensure fair wages are paid  and a level playing field to help local people can generate a sustainable income from tourism. 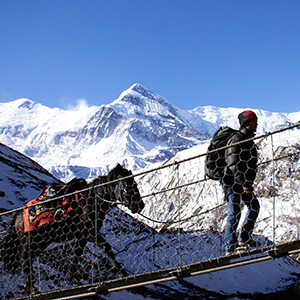 Annapurna circuit travel guide
Since it opened to foreign trekkers in 1977, the Annapurna Circuit has gained the reputation as one of the most spectacular and varied walks in the world... 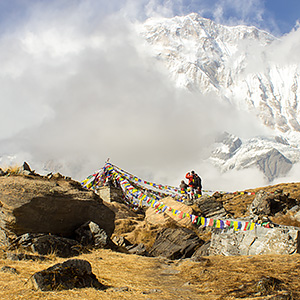 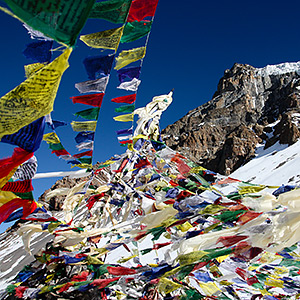 Annapurna Circuit map & highlights
From Tibetan villages to Hindu temples, the worlds deepest gorge and the highest mountain pass, the Annapurna Circuit offers some of the most varied, and spectacular, scenery of any trek in Nepal. 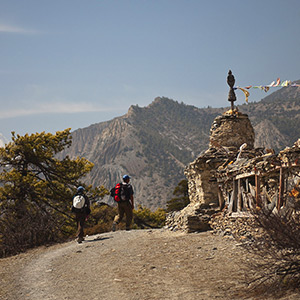 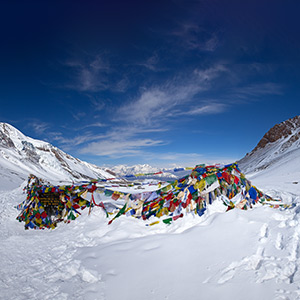 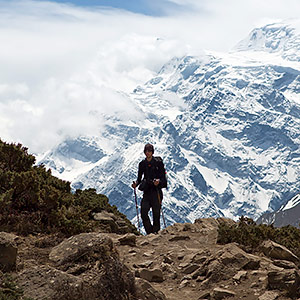 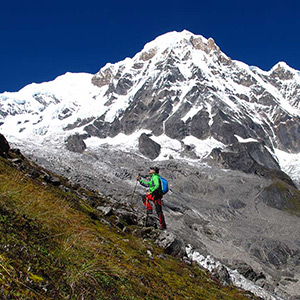 This is your opportunity to find out the best and worst of Nepal holidays as you delve into our Nepal travel guide and dig out a few tasty tidbits along the way, including: a brief history of Nepal, how much do things cost and how to travel like a local on your Nepal holiday.