Yes, you can still fit in a cruise from Dubrovnik to Split, even if you only have five days. You dont have to skimp on the luxury, either.
Dubrovnik Mljet Pucica, Brac Omis Split Optional Cetina River Canyon excursion
Price
£1005 excluding flights
Convert currency:

Daily swims, a new port every night, and a new delicacy to try every day: thats the beauty of a small ship cruise. Croatias Dalmatian Coast is ideal cruising ground, what with its myriad leafy islands and attractive ancient terracotta-roofed cities. Youll be looked after by a local crew, and eat totally local produce on board.

Dubrovnik is famous for its mighty walls and fantastic strategic aspect: a fortress of a city, guarding itself against the sparkling sea beyond. From here its a short cruise to Mljet, a leafy island covered by national park. Brac, an island further up the coast, is a popular beach destination. Here youll stop in Pucica, where pebbly bays and white limestone houses make this one of the prettiest villages in Europe.

On to Omis, a mainland town just south of Split, which was once home to the Adriatics most dangerous pirates, the Corsairs of Almissa. Whilst the pirates have long gone, their booty left the town with two intimidating fortresses.

End your journey in Split, where the ruins of Roman Emperor Diocletians Palace, are considered too important to clear away, so the city is built in and around its 2,000-year-old remains. This route can also be done the other way around  from Split to Dubrovnik, and its tough to say which is better.

Every cabin has an en-suite in your vessel, and you can enjoy buffet breakfasts, four-course lunches and fruit throughout the day. Your cruise might be short, but you'll still get a captain's dinner at the end to celebrate the voyage. 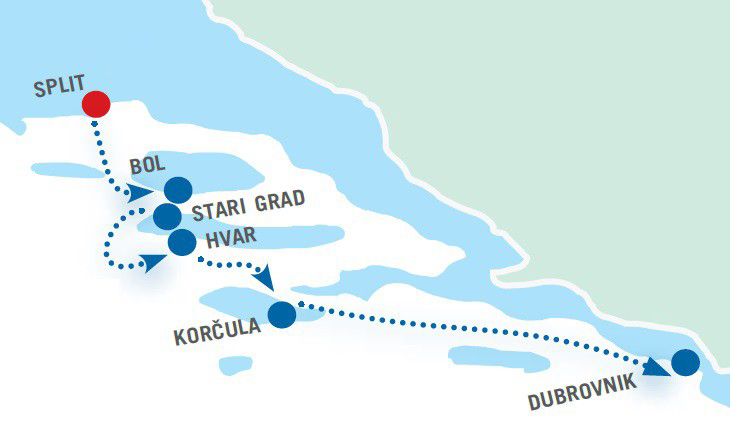 18 GBP per person port tax is payable on board

2 minute summaryBest time to go
If you could give a name to one of the small ships used to breeze into some of these remote Croatian islands or ancient mainland towns, it would be 'p...

2 minute summaryBest time to go
It is apt that the famous Dalmatian dog comes from Croatia. Both are covered in hundreds of beautiful spots, distinctive and bounding in energy. There...

Travelling by train:
We offer the possibility of travelling by train from the UK (or other parts of Europe) to Croatia and can book this for you. Leaving from London you need to allow 2 days to travel in either direction, though you can of course spend longer and enjoy some of the cities and scenery en route. The train is usually via Munich and Zagreb and through Slovenia, though it is also possible to travel via Italy (via Milan) and get a ferry to/from Split or Dubrovnik.

We can book this trip for you via train so you do not need to take a single flight. Please see above for details.

The food and wine served on board is almost 100% locally produced, supporting many small producers, keeping food miles to a minimum and helping to maintain the traditional small scale farming and fishing that the coast and islands depend on.

The vessels that we use are all built in Croatia, specifically for use in these waters. This ensures that the most appropriate local resources are used wherever possible, and that the vessels are all built to comply and exceed local environmental and sustainability regulations.

By using small ships to visit and stay in some of the smaller ports and villages, we are providing an opportunity for a boost to tourism without the need for potentially unwanted and inappropriate new hotels to be built, and without increasing road traffic.

By using small ships, we can visit all the small ports and harbours larger vessels cannot access. These ports are often quite close to each other so we don't cover much distance at all, whereas the larger vessels have to travel much further to find a port they can access, using a lot of extra fuel while missing out on many of the best bits.

Vast floating blocks of flats, otherwise known as cruise ships, arrive direct from Venice and spill their loads onto the Dubrovnik dock where they are met by a huge fleet of buses that whisk them for a couple of hours in the beautiful city. These monoliths cruise past one of Europe's most beautiful coastlines with barely a second glance, and without a thought to the places they are missing.

The vessels we use are all locally owned, operated and crewed. The captains are usually the owners of the vessles, and often most of the crew will be extended family! The food and wine served on board is almost 100% locally produced, supporting many small producers and helping to maintain the traditional small scale farming and fishing that the coast and islands depend on.

In the evenings all passengers are left free to eat ashore, in restaurants of your choice. This further supports local business and communities by putting money into the ports and harbours we stay in, providing employment and further utilising local produce.