The best time to go on a wildlife holiday to Costa Rica is from late December to April. These months are drier and sunnier - but always pack waterproofs just in case! July to October are peak turtle months in Tortuguero, however - while August to December sees thousands of olive ridley turtles hauling themselves ashore in Ostional for the annual arribada. Read on for more travel tips from our Costa Rica experts.

Best time to go on a wildlife holiday to Costa Rica 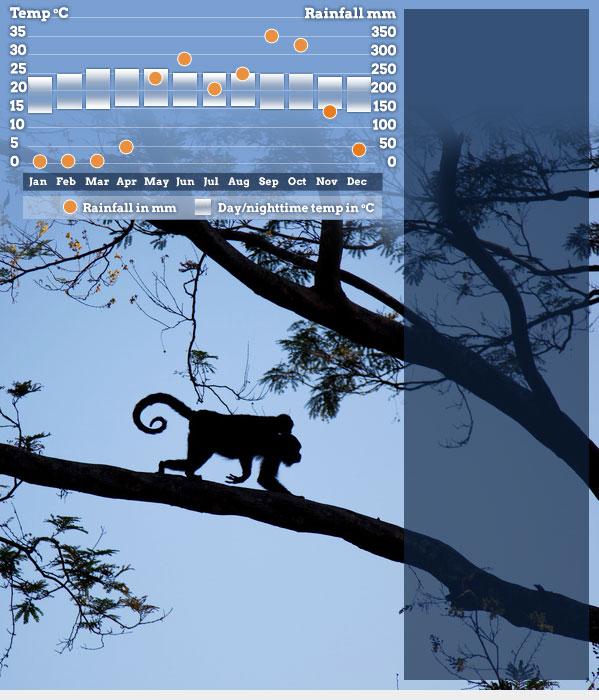 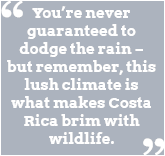 Cool mists and clouds persist in highland regions of Costa Rica all year round although the recognised rainy or winter season, invierno, lasts for just over half the year with May-Nov experiencing the wettest weather, especially in mountains and rainforests. The sparsely populated Caribbean coast tends to do its own thing and can be fairly wet all year round  especially compared to the Pacific  resulting in some incredibly lush landscapes for wildlife watching as well as crystal clear waters for watching marine life. The dry or summer season, verano, depends on where youre visiting with the north Pacific region enjoying warm and dry weather from Nov to May whereas the south Pacific will stay dry only from Jan to March.

WHEN TO SEE WILDLIFE IN
COSTA RICA

At the beginning of the year, January and February, the lack of rainfall tends to attract the crowds and although this is considered the best time to visit Costa Rica be aware that prices are higher and popular national parks such as Manuel Antonio can get busy.

As March and April are still relatively dry there are plenty of reasons to visit Costa Rica over Easter with the chance of afternoon and evening downpours increasing with warmer temperatures during May and June.

The warmer and wetter weather continues throughout July and August with more families attracted to Costa Rica during traditional northern hemisphere school holidays.

If youre hoping to witness nesting green turtles, the best time to visit Costa Rica is July to Oct (peaking in Aug) and leatherbacks from Feb to April. Olive ridley turtles come to Ostional to lay their eggs between Aug and Dec. Humpback whales pass by Caribbean and Pacific coasts from Aug-Oct and Dec-April; dolphins can be seen all year round.

September and October are notoriously rainy in Costa Rica with many roads impassable due to swollen rivers and mud slides. Rural regions, such as the Osa Peninsula often close completely so take this into consideration if travelling independently.

Masses of migratory birds also head to Costa Rica from Oct to Nov with falcons, hawks, swifts, swallows, wrens and warblers joining endangered great green macaws which tend to return in Sep-Oct to make the most of blossoming almond trees.

There are still showers in November but come December temperatures start to fall and youll find an intensely green tint to the rainforests with animals appearing from thick foliage; there are also some good prices to be had at the tail-end of the rainy season before Christmas kicks in.
Hello.
If you'd like to chat about Costa Rica wildlife or need help finding a holiday to suit you we're very happy to help.
Rosy & team
01273 823 700
rosy@responsibletravel.com

WHAT HAPPENS WHEN IN COSTA RICA

David Orrock, from our supplier Pura Aventura, shares his advice on the best time to visit Costa Rica: Its hard to advise when to go because one of the things that makes Costa Rica so amazing is the insane amount of microclimates and ecosystems. I wouldnt advise someone not to go in the rainy season  because that covers seven months of the year! Its known as the green season so youll see some rain but being a tropical country theres always that chance in Costa Rica anyway. We take families in July and August but we dont hear that theyve had any issues.
Photo credits: [Temp chart: Paul Kehrer] [What happens when: Jan Hazevoet]
Written by Chris Owen
◄ 2 min summary | Map & highlights ►

Contact us - call or email Call us from anywhere No queues or automation Sign up to our newsletter
Photo credits: [Page banner: Jay Iwasaki]
Back to the top