Responsible tourism in Switzerland is all about respecting the pristine natural landscapes that make this scenery so iconic. With global heating posing an existential threat to the ski industry, the pressure to expand tourism outside the winter season will grow, so were sharing our tips on how to travel well in Switzerland.

In May 2019, a huge Chinese tour group, numbering 12,000 in total, arrived in Switzerland on a work incentive trip. So large was the group that even when broken down into three separate batches, the organisers still needed to coordinate with police and local authorities to minimise disruption.

This type of situation is of course rare, but its also symptomatic of Switzerlands tourism conundrum. One consequence of a rapidly warming world is that many traditional winter activities such as skiing are threatened, as resorts at lower altitudes begin to regularly see less snow. With the winter tourism industry becoming more unstable, and less profitable, new avenues for revenue will be needed in a key sector for the Swiss economy, one that generates almost three percent of GDP.

And although Switzerland is not yet feeling the strain of overtourism that many other European destinations are struggling with, certain locations, such as the majestic Rhine Falls, largest waterfall on the continent, can get very busy during peak summer season. Behind Switzerlands picture-postcard perfect image of pristine alpine landscapes and charming traditional villages, there is trouble looming. 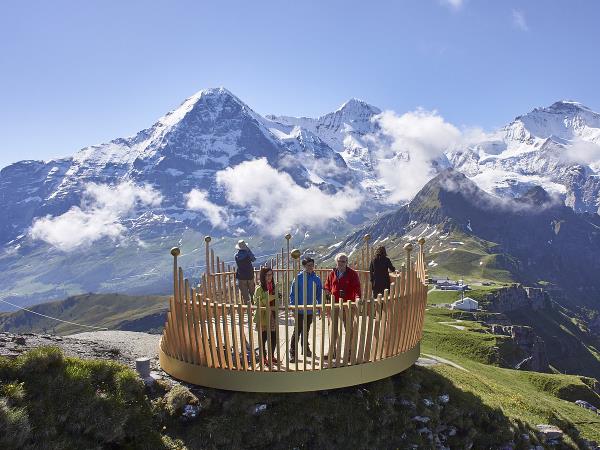 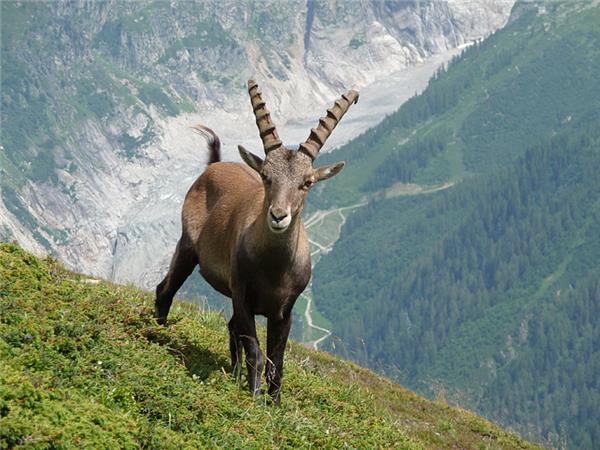 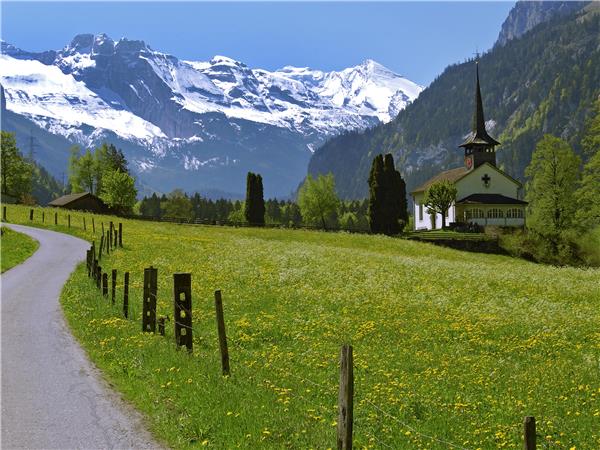 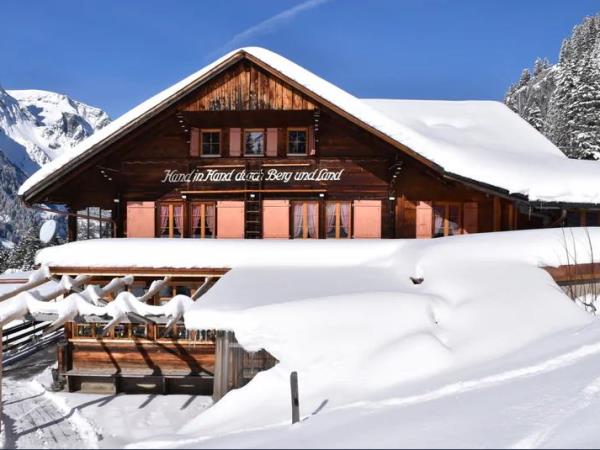 Snowshoeing in the Griesalp Switzerland with mountain guide 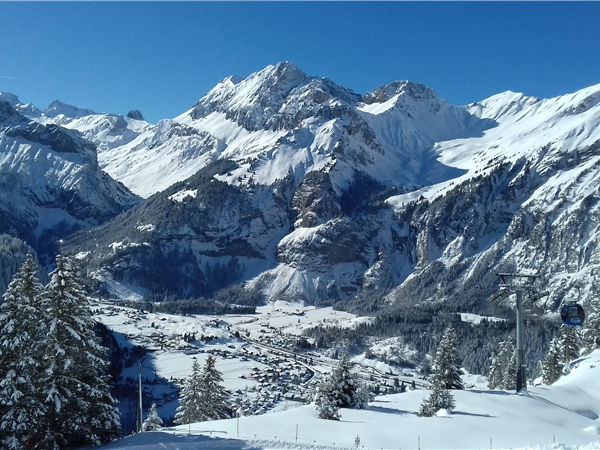 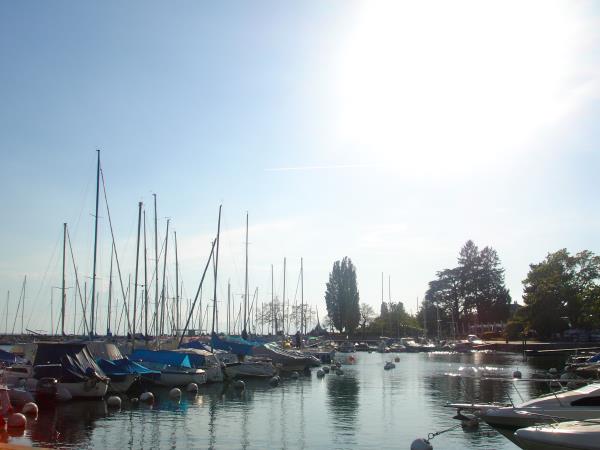 From 1185 7 days ex flights
See all our Switzerland Holidays

Tourism in the Swiss Alps has been in decline for some years, driven by numerous factors, not least by a strong Swiss Franc putting people off in favour of less expensive destinations. But there is one area of the market that is seeing significant growth, and that is visitors from Asia, specifically China. Tour groups interest in the iconic Switzerland scenery has exploded, not without controversy, but certainly very successfully.

Yet with this growth comes a requirement for new roads, new large hotels and resorts, new parking areas for coaches, and substantially increased pressure on the environment and local communities not used to this level of tourism. On the Matterhorn, one of the highest mountains in Switzerland, a cable car ride opened with four of its cars gilded with thousands of Swarovski crystals and glass floor panels that defog themselves automatically as they pass over the glacier  an excessively gaudy invention that has proved divisive. A new phase of the infrastructure project is now planned, which will be aimed at Chinese tourists expressly, who now number 1.5 million annually. The concept has met with grassroots resistance opposed to the increasing commercialisation of the Alps.

Switzerland is walking a tightrope between the need for more visitors and a clear interest from Asia, and the risk of mass tourism and its effects on the environment and culture. The need for a responsible approach to tourism, shifting focus to less-visited areas to ease the pressure on the over-visited, and ensuring that visitor numbers are sustainable, couldnt be any clearer.
What you can do
If youre planning a holiday in the Swiss Alps then look at avoiding peak season, which is the summer months of July and August, and for winter holidays, late December, mid-February and Easter. Crowds are largest in the most well-known resorts and destinations but there are many areas that see relatively few visitors, yet have much to offer both in terms of scenery and activities. Here youll find a more relaxed, more authentic take on Switzerland.

Booking with a responsible tourism operator means that you will usually be staying in accommodations that are locally owned. Shopping and eating locally also ensures that your money stays in the local economy. Small group tours and tailor made trips have a far lower impact on a destination than mega coach tours, and will also give you a more satisfactory experience through their connection to local communities.

The impacts of climate change are going to be vast and varied, and many remain difficult to predict. One thing we can be pretty sure of, however, is that formerly snow-sure ski resorts are now becoming much less-so. As snow cover in the Swiss Alps diminishes, particularly at lower levels, the financial viability of the country's winter sports industry will become unsteady.

Likely adaption strategies include the increased use of environmentally damaging snow cannon, which is one of the main reasons why Responsible Travel does not sell holidays that feature downhill skiing, and the building of more resorts and pistes at still higher altitudes  hardly a sustainable long term approach.
What you can do
Our guide to low carbon travel explores the need for travellers and the tourism industry alike to make holidays more sustainable. Bottom line: one of the most significant steps any of us can take is committing to flying less. Obviously for many destinations and types of holiday that’s not going to be realistic, but for Switzerland, it certainly is. You can get to Zurich from London by train easily and quickly (around seven hours) by train which, when you factor in check-in times and security at airports, is not much slower than flying, and is also city-centre to city-centre. An hour or so further on, and you can be in the Swiss Alps. Driving is the next-best option, and takes only a few more hours than going by train. Once you’re in resort, the quality and quantity of public transport available to you means you may not need to get back in the car again until it’s time to go home again.

We’re against downhill skiing, but not all skiing. Cross country skiing has a far lower impact on the environment and if you’re on a winter multi-activity holiday in Switzerland, it’s just one of several options open to you. Other winter sports available range from snowshoeing (easier than it might look!) to husky sledding, and glacier trekking wearing crampons. All of which are just as much fun as skiing in our opinion. 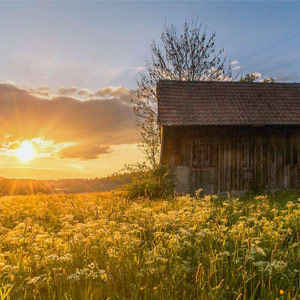 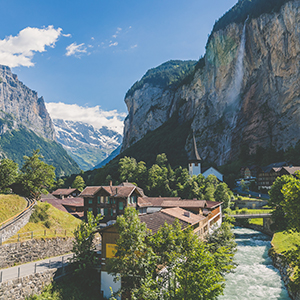 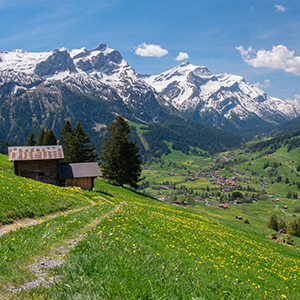 Switzerland map & highlights
In the words of Bruno, from our specialist operator Cyclomundo, its important to remember that where there are mountains there must also be valleys. 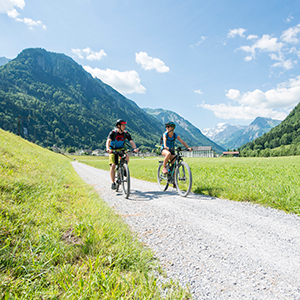 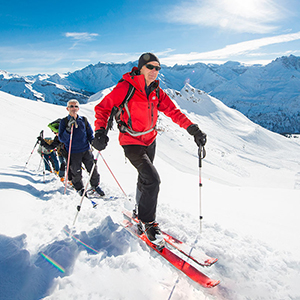 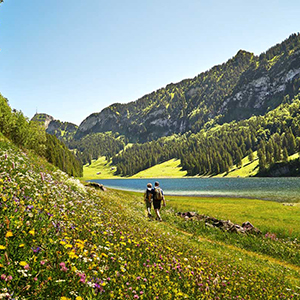 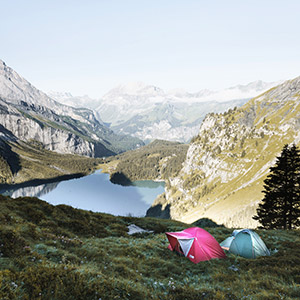 Walking in Switzerland will take you through Alpine meadows, into hidden valleys and over high-mountain passes in the shadow of Europes highest mountain. Youll pass glacial lakes, thundering waterfalls and iconic peaks, and with trails all easily accessed from chocolate box villages on foot, or by road, rail or cable car.