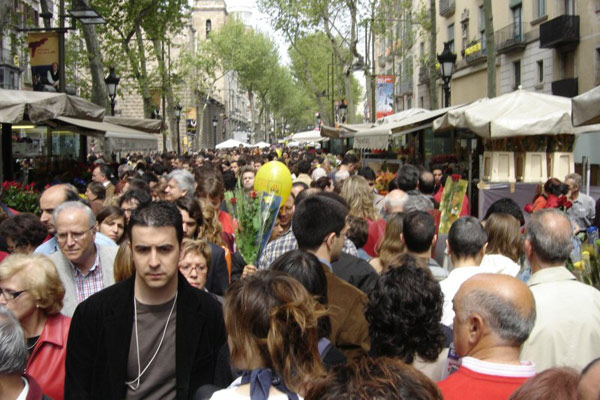 
Overtourism in Barcelona
Barcelona is one of those cities that on the surface seems just about perfect. It perches on the edge of the Mediterranean, has a gorgeous climate, is big enough to have plenty going on but small enough not to be overwhelming, and its palm tree lined avenues and cobblestoned backstreets are filled with glorious architecture. While just 1.6 million people are lucky enough to call Barcelona home, many more choose the city as a holiday destination. A lot more  close to 32 million each year [1], in fact. Trying get your head around that number is difficult; trying to elbow your way down La Rambla in peak tourist season is even harder. And spotting the words Tourist go home! scrawled on a wall is sure to put a dampener on even the sunniest of Spanish afternoons. Is Barcelona still a dream holiday destination, or has its moment passed?


Whats behind overtourism in Barcelona?
Barcelona today may be Spains go-to city, but this is a relatively new phenomenon. While hotels and resorts began springing up along the Costas in the 1960s and 70s, it wasnt until Barcelona hosted the 1992 Olympic Games that the city really appeared on the tourist map. The run down, industrial port city underwent a much needed facelift. It embraced its Mediterranean coastline, imported sand to create new beaches in place of ugly docks, and the tourists duly began to arrive.

Some of Barcelonas tourist appeal is inherent, given its location, climate, cuisine and laidback culture. But other aspects have been much more engineered by local government and the tourist board, both of which have spent years clamouring for ever more visitors despite the citys clear shortage of capacity. Barcelona has the Mediterraneans largest port, for example, which makes it a prime spot for huge cruise ships. In 1990, just 115,000 cruise passengers arrived in Barcelona. By 2017, that figure stood at 2.7 million, arriving into one of nine cruise terminals. The city was the home port for Allure of the Seas in 2015, at the time the worlds largest cruise ship with a maximum capacity of just under 6,500 passengers [2]. And in 2019, Barcelona (along with Palma) earned the unwanted title of most polluted port in Europe [3]. 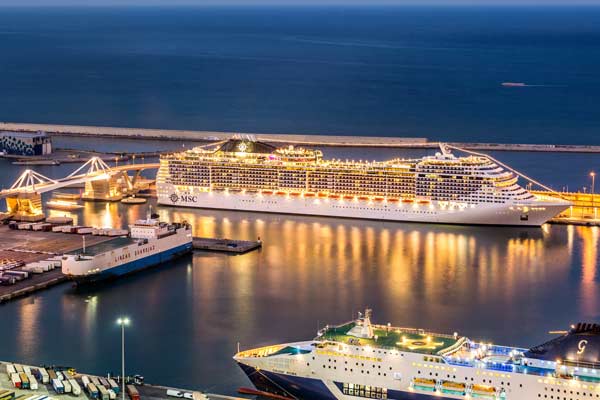 Overtourism is not just about too many people, however. When it comes to Barcelona, the issue is that they are all arriving at once. Of the 32 million annual visitors, around half are day trippers; this will include most of the cruise passengers. Spending just a few hours in the city, visitors have a limited radius and will tick off the same few places: La Rambla, the Sagrada Familia, Parc Güell, La Boqueria market. Dr Harold Goodwin, in his 2016 paper on Managing Tourism in Barcelona, described it as feeling like a tidal wave when, after breakfasting on board the ship, there are as many as 35,000 people arriving on foot at the Mirador de Colón, to walk up La Rambla. Little money is spent outside of the main tourist cafes and souvenir stalls, and the congestion is unpleasant for both residents and other tourists. In the case of the cruise passengers, many will book tours through the cruise line itself, which leaves even less money in the city.

Even those who do book accommodation spend an average of just two nights here, which allows little opportunity to venture beyond these same hotspots, and no real chance to scratch beneath the photogenic surface. This is compounded by the fact that in terms of residency Barcelona is one of the most crowded cities in Europe, with over 15,800 inhabitants per square kilometre. Add in a few thousand  or even just a few hundred  tourists, and it starts to resemble a sardine tin.


Overtourisms impact on Barcelona
In 2017, it was reported that there were 125,000 legally registered beds in hotels and tourist apartments, and 50,000 illegal beds [3]. The high demand for tourist accommodation, coupled with the opportunity to rent out rooms and apartments via sites such as Airbnb, has meant that rents are soaring, and residents are struggling to afford the increases. Ada Colau has been the Mayor of Barcelona since 2015. She has claimed that overtourism is affecting not only residents quality of life, but their very ability to live in the area. [4]

A 2015 consultation carried out by the Barcelona authorities reported various issues, ranging from overcrowding and tension to a loss of identity and a rise in antisocial behaviours. Although tourism brings substantial revenue into the city, currently comprising around 12 percent of Barcelonas economy, poor redistribution of the wealth generated and poor quality jobs were further issues highlighted in the consultation [5].

Everyday shops are being replaced by souvenir stands, bike rental shops and cafes which may be unaffordable  or simply unnecessary  for many local residents. 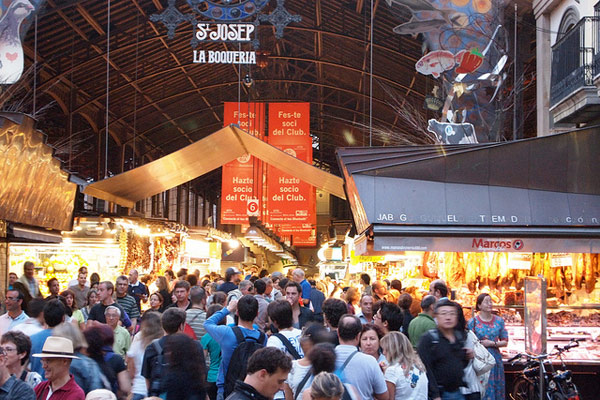 market. Photo by ddohler
How are residents reacting to overtourism?
One reason that overtourism has made more headlines in Barcelona than in other destinations is the local response. The Catalans are not known for their armchair activism; they have gone onto the streets and shown the world how they feel.

Signs around the city call tourists bastards, and terrorists. They demand that tourists go home. They claim this isnt tourism, its an invasion. They call their city Carcelona - carcel means prison. In July 2017, masked protesters attacked a tour bus, slashing the tyres and scrawling the words El Turisme Mata Els Barris  Tourism Kills Neighbourhoods  on the windscreen [6]. Tourist bikes have had their tyres punctured, and the streets and plazas have been filled with placard-heavy marches and rallies.

For most protesters, however, this is not a battle with the tourists; its a battle with the authorities, with businesses, and even with capitalism itself. What they object to is the lack of regulation, and the blatant incentives that have allowed their city to become increasingly unliveable. Its worth bearing in mind that while many of us are only just becoming aware of overtourism, Barcelonans have been living with it for many years already. As early as 2009, residents of Barcelonas Old City district sent Christmas cards to city officials depicting, amongst other things, tourists using the street as a toilet and having sex in public. The district had become popular with stag parties, and prostitution and drugs were commonplace. The authorities had begun to develop strategies to manage tourism the previous year, concerned about how the negative attitudes might impact on visitors to the city, and its image overseas. 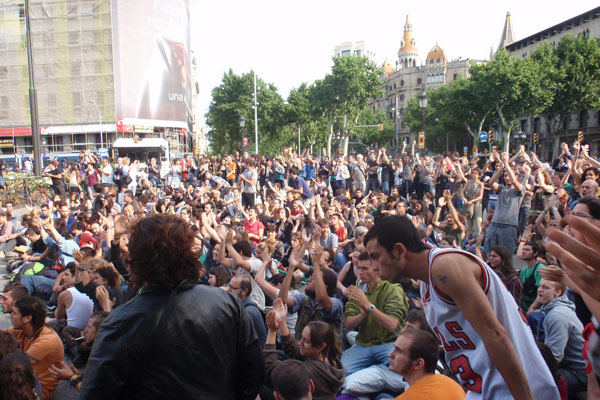 Protest. Photo by Oh-Barcelona.com
What is being done?
Some destinations which have been hugely impacted by overtourism have taken drastic measures to curb overtourism, from segregating tourists and residents, to tightly controlling visitor numbers. Barcelona, however, is targeting accommodation. The local government is not currently issuing any new licences for tourist accommodation, and new regulations have been introduced to reduce the number of short term private lets, which would effectively prevent these from being used by tourists.

However, the Managing Director of the Hotel Business Confederation of Catalonia, Manel Casals, claimed in 2017 that the government was focusing on entirely the wrong issue. Of the 32 million people who visited Barcelona last year, only eight million stayed in hotels They are not regulating tourism; they are only regulating the places where they are going to sleep. [7]

To begin with, only scant measures were implemented to control numbers in the worst hotspots. In Park Güells Monument Area, for example, only 400 people are admitted at any one time, and tourists are charged an entry free, while residents may enter free of charge. La Boqueria food market has banned groups of more than 15 people during peak hours, as they block the aisles while taking photos. Residents have criticised this measure as greenwashing on behalf of the city council, as many tour groups contain fewer people, but are still disruptive. Gaudís magnificent La Sagrada Familia basilica meanwhile has increased the number of ticket offices, added online booking services, and improved parking facilities. These will help manage crowds, of course, and disruption in the surrounding area, but perhaps stricter measures still are needed.

But Barcelona City Council has now launched its Strategic Plan for Tourism 2020 [8], which recognises the citys dependence on tourism, but acknowledges that it must move away from constant promotion and increasing numbers, and focus more on governance to ensure that tourism is sustainable. New narratives on destination marketing are forthcoming, designed to reduce pressure in the most popular areas of the city, ensure tourism jobs are of higher quality, crack down on illegal accommodations, and toughen up on the environmental impact and mobility issues caused by cruise ships. Mayor Colau, meanwhile, is threatening to slash cruise ship passenger numbers and limit the citys airport expansion [9]. Oh, and the Barcelona FC star Lionel Messi was recently named the UNWTOs Ambassador for Responsible Tourism! [10].

The first step to dealing with any problem is recognising that there is a problem in the first place. The tourism authorities in Barcelona appear to have finally taken onboard the complaints of residents and are taking steps to deal with it. Barcelona has been a poster-child for overtourism for years. Hopefully, it will soon be a model of how to deal with it.


What can you do?
If you are keen to visit Barcelona, the best thing to do is to visit outside of peak summer months, which are from May to September as well as Easter. Winters can be beautifully sunny on the Catalan coast, and the reception youll receive  once the city quietens down  will be warmer for sure. As this is a top weekend break destination, Friday, Saturday and Sunday are the busiest days. Try visiting Monday to Wednesday if you can. Definitely stay for more than a day, and do some proper research to get away from the usual sightseeing draws and into the real heart of the city. Local guides are invaluable for this; they can take you off the main drags and into local neighbourhoods. As a bonus, you wont be paying tourist prices, and the food and entertainment will be more authentic, too (hint: tapas and flamenco are not Catalan).

Do ensure you stay in registered accommodation; illegal lets are not subject to the small tourist tax (a couple of euros a night) and contribute to the rising cost of rent in Barcelona. Learn a few words of Catalan, too; there is a strong regional identity here, and saying bon dia rather than buenos dias, gràcies rather than gracias and adéu rather than adios, will show respect for your hosts.

Outside of Barcelona and a few spots along the Costa Brava, Catalonia is strangely overlooked. Its other cities  Girona, Tarragona  are utterly gorgeous, without any of the hype of its capital. The countryside is really quite unexpected, with wild mountains soaring to over 2,500m, secluded coves without a stag do in sight, waterfowl-rich rice paddies and wild boar inhabited forests. With few visitors from the rest of Spain, let alone overseas, you can discover the real Catalonia, just an hour or two from the packed streets of Barcelona.

Watch the documentary Bye Bye Barcelona to learn more about overtourism in Barcelona, and the impact it is having on residents.
Sources
[1] Barcelona unveils new law to keep tourists away  The Telegraph
[2] Number of cruise passengers in the Port of Barcelona from 1990 to 2017  Statista
[3] Barcelona and Palma ranked worst in Europe for cruise ship pollution  The Local
[4&7] Tourism crisis: Barcelona to limit the number of visitors  TourismReview
[5] Managing Tourism in Barcelona  Harold Goodwin
[6] Tourism kills neighbourhoods: how do we save cities from the city break?  The Guardian
[8] Barcelona Tourism for 2020  ajuntament.barcelona.cat
[9] Barcelona is threatening to shut down tourists  Forbes
[10] Why Lionel Messu is making responsible tourism cool  Independent

Written by Vicki Brown
Back to the top