Is travel a right?  The concept of right, & when its just wrong 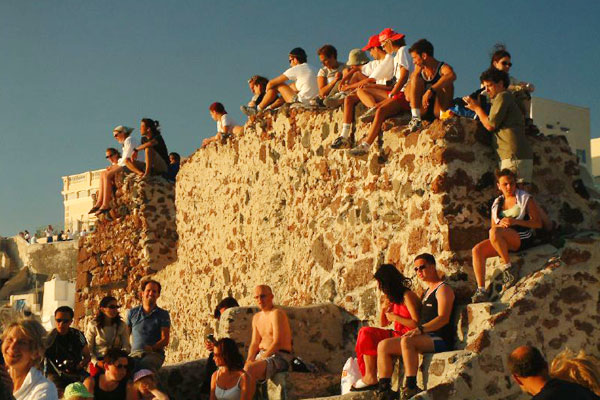 Crowds gathering for the sunset in Santorini. Photo by nocomment
I know my rights is a well used phrase in the legal and commercial world, and it is now making regular appearances in discussions about tourism and, in particular, overtourism. When tourists are informed that damage to streets, parks, mountains, ancient sites or beaches are leading to a forced restriction on visitor numbers, or indeed a tourist tax, we all have a right to travel is the most commonly used protest line. You can print it on as many holiday t-shirts as you like, but at Responsible Travel, we dont completely agree.

Of course we value travel. We sell holidays, after all, but we are working hard to get our heads around this rights issue. It is a complex concept; however, it is one that is worth exploring to understand this belief by many that we all have a right to travel. Certainly, the residents of Venice, Dubrovnik, Barcelona, Amsterdam, and cruise ship destinations from Santorini to Skye, dont agree. They are understandably shouting what about my rights? as their streets get ruined, water resources usurped and air polluted by giant cruise liners with thousands of tourists arriving en masse.

Philosophers, theologians and politicians dating back to the Greeks and Romans have made an important differentiation between natural rights and legal rights. Natural rights are those that are not dependent on the laws of a culture, community or government. They are sometimes, therefore, described as universal or inalienable. Legal rights are those put in place by a legal system. In tourism, these two concepts can often be confused and also lead to conflict. The US governments Executive Order in January 2017 Protecting the Nation from Foreign Terrorist Entry into the United States was probably the most shocking example of this. 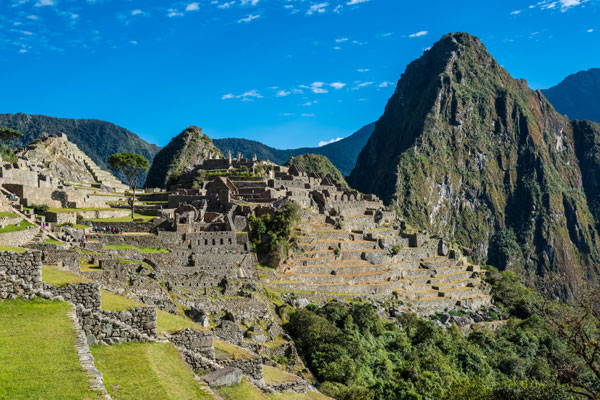 Machu Picchu
Tourists and travel firms get upset about their rights when all sorts of travel restrictions are put in place. They didnt like the Balearic archipelago introducing a Sustainable Tourism Tax in 2016 of between 0.50- 4 per day for any visitors over the age of 16. Many were upset when they heard that Perus Ministry of Culture changed the law in 2017, resulting in Machu Picchu permits only giving access to the ancient site for half a day, instead of a day. If tourists want to stay for a whole day they need two permits. The reason? To regulate the flow of travellers entering the site and help to preserve the authenticity of this national treasure. These are both examples of us still having a right to travel but only within the legal rights of the country. With growing tourism numbers, such restrictions on travel will become more and more common.

It is important to note that such actions to restrict tourism activity are also the result of people expressing their rights. And in this case, we mean the people who live in these places we love to visit. They have rights too. English 17th century philosopher, John Locke, led the way for many to come with his belief that everyone had a right defend his or her life, health, liberty, or possessions. The residents of cities like Barcelona, Dubrovnik, Venice or Amsterdam, to name but a few, are expressing that right by protesting against the tourist crowds. Their health is at risk from the nonstop diesel fumes of giant cruise ships in Dubrovnik, or from stag weekenders defecating in the streets of Reykjavik. Their liberty is threatened because they cant even buy food at their local La Boqueria market in Barcelona because it is so packed with tourists. In Goa, there are stretches of coastline where Indians are not allowed to use the beach, cafes or stay at the waterfront cabins. They arent even private beaches; they are just foreigner only terrain. 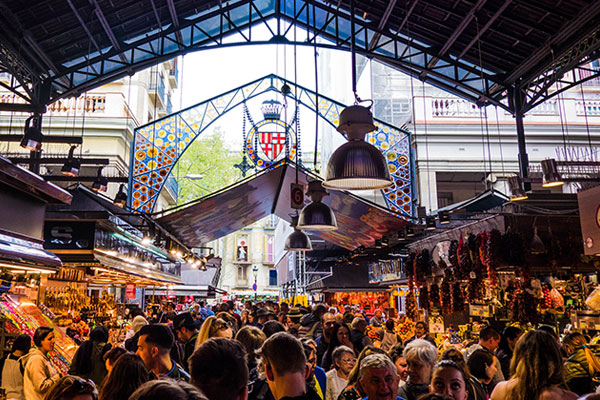 La Boqueria, Barcelona. Photo by G0DeX
Lets also not overlook the fundamental importance of respecting human rights in tourism, as in all aspects of life. By saying that we do not always accept that travel is a right, it does not mean that we are undervaluing basic human rights, as defined by the Universal Declaration of Human Rights (UDHR). The core principles of the UDHR must always be applied to tourism, such as equality, freedom from slavery, freedom from torture, freedom of expression and workers rights. The same goes for everyones right to water, which was declared a basic human right in 2010 by the UN.

We never condone violence as a means of protecting our rights, but we do understand local people venting their frustration in protest form when this rights issue in tourism seems to be a one way street. And a very overcrowded street at that. But times are changing. The rights of local people are finally being heeded, because governments are slowly but surely waking up to the fact their voters and tax payers should be listened to  and that that they may actually have a point. In the meantime, travellers need to get over the fact that they dont actually have an inalienable right to travel. That the consumer is not always right. Critics of tourism sometimes describe the industry as a form of neocolonialism, and when consumers march in demanding their alienable rights to travel here, there and everywhere, you can see why the critics hackles are raised.

In travel, it also helps to stand back and look at a variety of cultural approaches to the concepts of rights. The key concept of dharma in Hinduism encourages a life where both rights and the right way of living hold equal importance. This concept is definitely applicable to tourism, where we might stand by our right to travel en masse through the streets of Barcelona, but we should also respect that there is a right way of living and that, as Hindu philosophers say, be aware that your actions always have consequences. For Buddhists, the word right comes up again and again, but in the context of the right thing to do, rather than in the context of something we demand. 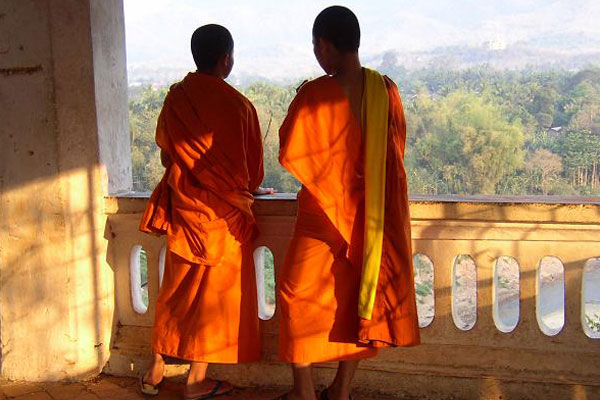 Buddhist monks. Photo by Paul Arps
The UN World Tourism Organisation (UNWTO) refers to the tourists right to travel in its Global Code of Ethics for Tourism several times. It defines the right to tourism as a right equally open to all the worlds inhabitants and it supports the liberty of tourist movements. Tucked away in the Code is also another important line: Tourism policies should be applied in such a way as to help to raise the standard of living of the populations of the regions visited and meet their needs. Yet, when local people stand up and shout about their rights in this way, they are often ignored or told to get over it because tourism brings them so many benefits.

Where is the UNWTO to help ensure that this latter principle is also upheld? In response to anti tourism protests in Barcelona in 2017, the Secretary General of the UNWTO, Taleb Rifai, commented: These people are going to be regretting what they are doing today. He added Tourism is not the enemy. Growth is not the enemy, numbers are not the enemy. Its how we manage growth that matters. 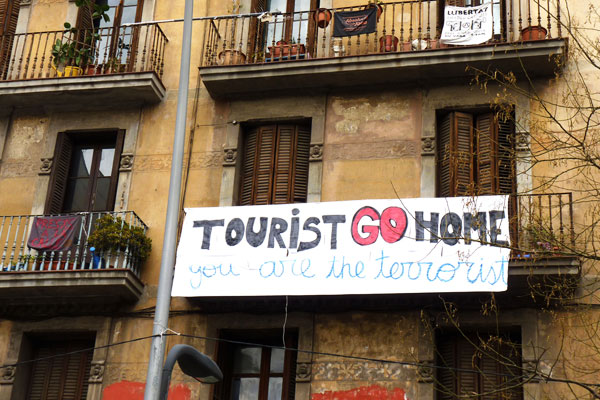 Protest banner in Barcelona. Photo by Miltos Gikas
It is worth noting that the UNWTO has a large body of affiliates working as advisories in tourism. These affiliate members are companies (public or private), organizations, destinations, NGOs, educational institutions or bodies whose activities are related to tourism and which contribute to the UNWTO their knowledge and expertise. There are in fact 500 affiliate members in over 80 countries, ranging from Airbnb to Atlantis Line Sea Cruises, the City of Venice to CNN. Thats a lot of people to please and a lot of different views on who has rights to what. Especially as it is difficult to get our head around what the word rights actually means. Right?

Justin Francis, Responsible Travels co-founder and CEO, says, I still see travel as a privilege, not a right. For starters, I can travel because I am comparatively rich. So many people in the world are in poverty and cant travel at all. This idea that it is our right to go wherever we want for the sake of tourism is just wrong, in my view. Which is why, at Responsible Travel, although we are trying to get to the heart of the issues around overtourism, we are focussing not so much on our rights, but more on the right thing to do.

Written by Catherine Mack
Back to the top