Overtourism - What is it, and how can we avoid it? 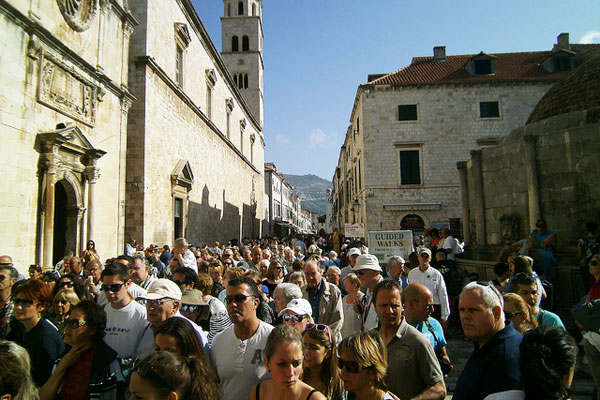 Crowded streets in Croatia. Photo by amanderson2
Since its inception, tourism has been considered a benign activity. This is hardly surprising; the holiday industrys USP is leisure, enjoyment, a break from all responsibility. It has brought wealth to forgotten rural communities, cushioned the blow of financial crashes, conserved critically endangered species and restored crumbling, historic cities. Tourisms potential benefits are clear. However, the mistake is to think that it can only bring good. Many of us do not believe this myth, and have been speaking out against it for decades. Our concerns were dismissed, until very recently. In summer 2017, the media and the travel industry finally began to turn their gaze to the negative impacts of the holiday industry, and the term overtourism was coined.

Why is it happening?
The travel industry, like many others, focuses almost exclusively on growth, with little or no concern for the impacts. After decades of virtually uncontrolled growth, it has crossed a threshold: in many destinations, tourism now demonstrably creates more problems than benefits. This can take many forms; perhaps a million additional tourists are arriving in a capital city, or 20 additional tourists in a small, rural community. Overtourism is not just a big city issue; it has been documented in wilderness areas and national parks, and in places such as the Isle of Skye.

Why is this in the news now?
Visitor numbers have been rising steadily for decades, as anyone who lives in a popular tourist city, or who has visited certain beaches or landmarks, will attest. Currently, there are around two billion tourist arrivals per year  a figure which is growing at a steady six percent.

Overtourism is, therefore, not a new problem. However, while the term itself was coined in 2012, it did not hit the headlines until the summer of 2017. This was not because of the increase in tourist numbers, which had not been particularly dramatic. What made the news in 2017 was the sudden backlash from local residents, which had not happened before on any large scale. There had been a slow drip feed of tourism into cities such as Barcelona, Venice and Dubrovnik, into places one thought of as remote such as Iceland and Skye, and finally, as the balance tipped and this new concept was given a name, the protests spread. There were marches in the streets, graffiti saying Tourist go home, and in some cases local authorities responded by increasing fees, refusing to issue permits for more tourist-focused businesses in city centres, and even closing entire islands to visitors. It was these responses which made the news. 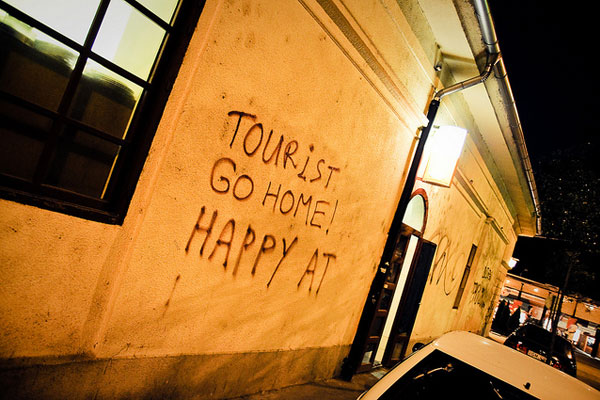 Tourist go home, Budapest. Photo by Felix Montino
What are the key causes of overtourism?
There are many contributing factors to overtourism, and of course these will vary from place to place. Airbnb has been used as something of a scapegoat in, as thousands of beds have suddenly been made available in towns and cities around the world, without being subject to any kind of planning, permits or  in many cases  taxes. Hosts can undercut nearby hotels and hostels, rooms open up in already-saturated districts, and as the home share concept becomes ever more commercialised, the demand for apartments means that rents are pushed up, and local people are pushed out.

But while Airbnb may have a supporting role, it is far from the leading player. If anything, it is more of a symptom of overtourism that one of the main causes. Local and national governments and tourist boards have long believed that more is better. A successful year in tourism is generally considered to be one in which numbers have increased substantially. Never mind whether these numbers are of cruise ship passengers, duty free shoppers, resort guests, backpackers or high end visitors; the number is all that counts. This has resulted in a reluctance  or often outright refusal  to cap numbers in any way, to increase (or introduce) daily tourist taxes, to charge cruise lines for docking, or to try and ensure that tourists behaviour is beneficial  or at the very least, not damaging  to local lifestyles and landscapes.

Another issue is the availability of cheap flights, which have saturated Europe in particular in recent years. When it is cheaper to fly from London to Morocco, than to take a train from London to Manchester  then we have a problem. These artificially low fares are only possible thanks to tax and VAT not being charged on aviation fuel, a subsidy which saves the industry billions of pounds per year in the UK alone.

Cruise ships, too, are allowed to burn a particularly cheap and polluting type of fuel, which also allows them to keep costs low. And giant cruise ships are another contributing factor when it comes to overtourism. Thousands of passengers spill out into port cities each day, returning to the ship in time for dinner. Passengers often spend very little in the destinations, yet ensure that historic streets, monuments, cafes and shops are rammed with people, creating an unpleasant experience for residents as well as for visitors who may be staying on land and spending money locally. 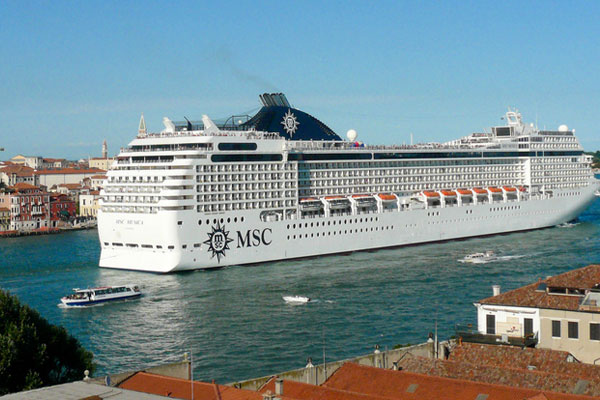 Large cruise ship in Venice. Photo by Marc Berry Reid
What can tourists do to avoid overtourism?
Responsible tourism refers to tourism which creates better places for people to live and to visit  with the emphasis on to live. Therefore, by definition, it is the opposite of overtourism, which diminishes the quality of life for local residents and creates a negative experience for visitors. Overtourism is sometimes simply a case of numbers: there are too many people in a particular place at a particular time. But in some cases, taking a more responsible approach to tourism can mitigate the negative effects.

In these cases, the solution can be to travel as a responsible tourist; to travel in ways which maximise positive impacts and minimise the negative ones. Two things to think about are the place, and think about the time. Spain, Italy, Iceland and Croatia have all been in the news as victims of overtourism, but in each case, this is extremely localised. Barcelona is rammed, and many of its residents are understandably fed up, but Spain is a surprisingly large country, and many of its cities are not at all crowded with tourists. Better still, head out into the villages and mountains for a real glimpse of the country away from the mainstream hordes. Not only will you have a much more realistic insight into daily life in Spain; but in many small pueblos youll be eagerly welcomed as one of the few tourists to arrive. There are many places around the globe that need, and want, more tourists.

Of course, if you really do want to meander through the aisles of La Boqueria, then you have no choice but to visit the Catalan capital. But what you can do is to visit it outside of peak season. This is more pleasant for you, less stressful for residents, puts less pressure on things like public transport, and may even save you quite a bit of money, too.

And whenever you travel, try and ensure as much of your cash stays as local as possible. Pay national park entrance fees to ensure your visit supports conservation; stay in locally owned guesthouses; eat at local restaurants and take tours with local guides. Tourism can still be very much a force for good, and ensuring that local residents, habitats and wildlife benefit from your presence is an important part of that.

Travelling responsibly, in smaller numbers, not only helps avoid overtourism. It will give you a greater connection with local people and ways of life: a far more authentic holiday experience.

What else can be done?
As tourists we can ensure our own behaviour is as beneficial as possible, but to really effect change across the industry, and around the world, things need to happen at a much higher level. Governments and local authorities need to look at ways to control tourist numbers  whether by raising prices, issuing permits to certain attractions, banning cruise ships over a certain size, or having greater control over which businesses open and where.

All the while that increasing numbers remains the goal of tourist boards and other tourism bodies such as the UNWTO, this will not happen. But as soon as the focus shifts away from this, we can really start to tackle some of the industrys greatest challenges. Overtourism may seem like a new concept, but there are many examples around the world of how it has been successfully avoided, dating back years. Gorilla tracking in East Africa is one such example; just eight permits per day are issued to track each gorilla family, and permit prices range from US $500-$750. Far from causing outcry, tourists view the handful of expensive permits as an exclusive, once-in-a-lifetime experience. The experience has not been boycotted; permits regularly sell out. Better still, the forests remain intact, and gorilla numbers, which were once threatened, have increased substantially since the introduction of tourism. 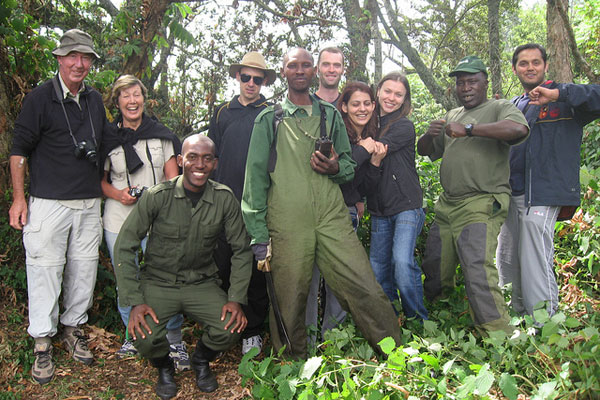 Gorilla tracking in Rwanda. Photo by David Bacon
In Antarctica and the Galapagos Islands  both exceptionally fragile habitats teeming with endemic and endangered species  restrictions on the size of cruise ships and the number of passengers who may disembark at any one time have ensured the sustainability of tourism. And on the Inca Trail, only around 200 trekking permits per day are made available for tourists. These, too, sell out, often many months in advance.