Gozo holidays showcase the smaller of the two principal islands of the Maltese archipelago offering a tranquil oasis of hidden beaches, small villages and rolling hills, where life runs at a laid back natural place. With winding country roads lead through empty valleys to quiet villages where people are always friendly and pleased to see a new face, it is the perfect off the beaten track location for that relaxing family holiday or active break away from home.

The island ferries cruise past the pretty island of Comino and its tiny sister Cominotto which lie just between Gozo and Malta. Barely 2 kilometres long, Comino rises at its highest point to some 80 metres above the sea, and its coves and cliffs are amongst the most beautiful of the entire Maltese archipelago.
Unlike its two bigger sisters there are no signs of early settlement on Comino, and the first permanent community on the island was founded by the Knights of St John in the 16th century, who built a substantial watchtower at the southern tip in 1618.

Its purpose was to deter pirates and smugglers who used the tiny island as a handy base to raid ships sailing into Maltese and Gozitan ports. The tower, which can be clearly seen from Malta and Gozo was part of an early warning system, signalling the threat of imminent attack along the coast.

Comino though, apart from a small garrison manning the tower seems to have been largely used as a private hunting reserve for the Knights, and later by the British as a temporary prison camp for French prisoners of war awaiting repatriation following their defeat and expulsion from Malta in 1800. For more than a century the island was left largely untouched until it was briefly used as an isolation hospital during World War One, and then again as a disease-free zone to breed pigs during Malta’s Foot and Mouth scare in the 1970s.

Today the island has a permanent population of 4, who live in the old barracks not far from the Watch Tower. There is of course, in this deeply religious country, a small chapel, built in the same year as the Watch Tower, in which mass is held every weekend during the summer. Should the weather be too stormy for the priest to cross the narrow channel from Gozo a mass is held on a chapel overlooking Comino on the Gozitan coast, with a bell ringing at each stage of the service so that the faithful worshipping in Comino can follow in time.

From October until May the island is largely deserted, with only the occasional visitors making the trip over from Malta or Gozo to walk the empty beaches and white sandy trails or to watch birds, especially during the migrating seasons in spring and autumn when many species can be seen, from tiny warblers to birds of prey. With hunting and trapping totally prohibited, the island is a bird sanctuary and many of the resident birds are so tame that they can be approached very closely, particularly the quails which can often be seen fossicking through the fragrant garrigue – the Mediterranean scrub of rosemary, thyme and other scented herbs. Bird ringing camps take place each year in April and October.

But Comino in the summer undergoes a complete change of character. With one of the most beautiful swimming locations of the entire archipelago at the Blue Lagoon, a small bay of pristine white sand and astonishingly clear water, the island bustles with visitors who arrive by regular ferries from Marfa or Mgarr, or in their own boats.

The only hotel – called the Comino, overlooking the tiny St Nicholas Bay – opens for the summer months and is usually fully booked in the high season. 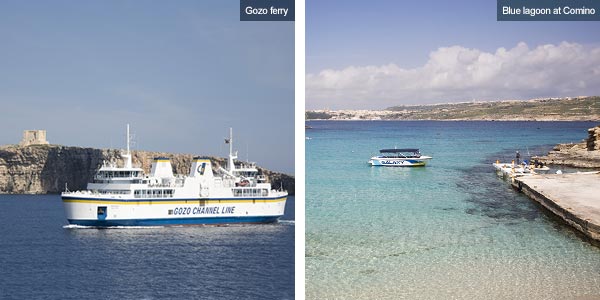 Just around the point in St Mary’s Bay the hotel has bungalows for hire, which have their own swimming pool and a café. Close by the island’s only camp site is filled to capacity during the peak months. There is even a small police station, manned during the tourist season by two policemen from Gozo who must have one of the loveliest beats in the world. A flag is hoisted above the pink painted building when the policemen are on duty. On the western tip of the island the Comino Battery was built in the early 18th century to protect the channel between Comino and Malta, and today the semi circular platform can still be seen. The round island walk, which includes the watchtower, the battery, the Blue Lagoon and the two bays of St Nicholas and St Mary takes about two hours.

Despite being so popular, even in the summer the determined walker can still find a empty spot to swim or sunbathe in peace on the indented coastline of rocky inlets and coves, with paths leading down to ledges just above the sea. Cominotto, which can be accessed by wading or swimming has a small beach and small cliffs on its seaward side. The waters around both islands have excellent snorkelling over reefs and clear white sand, and excellent dive spots which are regularly visited by dive boats from both Malta and Gozo. Between April and October regular ferries run to Comino from both Gozo and Malta, but in winter visitors will have to hire a boat or join a prearranged trip. In summer there are kiosks selling drinks at the Blue Lagoon and cafes open at the hotel and St Mary’s Bay. In winter be sure to bring your own food and drink.
Responsible Travel would like to thank the Ministry for Gozo for their sponsorship of this guide