Gozos geography is dominated by the limestone the island is made up of. It has formed pleasant rolling hills in the centre to spectacular formations at Dwejra and the Azure window as well as 140 meter high cliff on the south of the island. Gozos history spans from 7000 years ago with the Ggantija temples, one of the oldest stone structures in the world, through Roman, Byzantine, Turkish and later British occupation to the present day island with a population of 30,000, which is fiercely proud of its tiny island home

History and geography in Gozo

Geography
The island of Gozo is only 7 kilometres by 14 long, but has a widely diverse unspoiled landscape which has escaped the bane of mass tourism unlike many other Mediterranean islands. With a population of 30,000, which is fiercely proud of its tiny island home, and a complex multilayered history which goes back as far as the earliest settlement of prehistoric Europe, Gozo's geography and history offers the discerning visitor far more than many other island holiday destinations.
The geology of the island is largely formed of sedimentary limestone from sea beds which are more than 25 million years old, and the casts of shell fossils can clearly be seen on the exposed rock, particularly in the spectacular landscapes of Dwejra and the Azure window. The softer globigerina limestone has eroded over the millennia giving the island its pleasant rolling valleys and small hills where the harder older coralline limestone has been more resistant to erosion. On the southern coast, at Ta’ Cenc, this limestone has created the immense and beautiful cliffs which drop 140 metres sheer into the sea. The highest point on the island is close to the village of San Lawrenz where the Ta' Dbiegi hill stands 190 metres above sea level, with wide views over the gentle sloping valleys lined with terraces and small fields. To the east, the tiny island of Comino lies half way between Gozo and Malta. Barely two kilometres long the island has only four permanent residents and yet one of the most popular summer swimming places in the Maltese archipelago at the Blue Lagoon, a lovely bay of clear water and sparkling white sands. 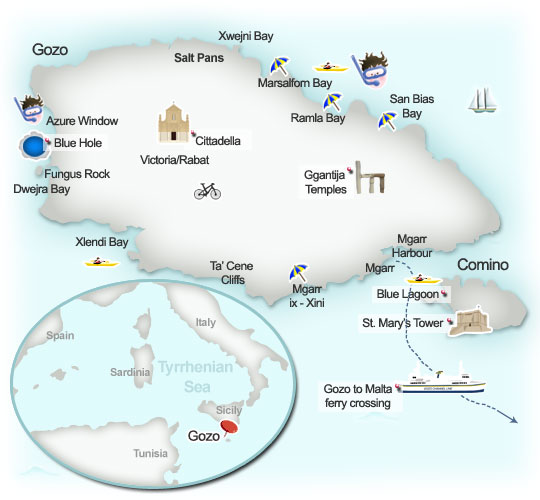 Largely self sufficient for its entire history, Gozo has fertile soil, and today much of the land is still farmed in small allotments of vegetables and cereals, with vineyards, and orchards.

At Xaghra, in the centre of the island, where the land is most fertile, stands the extraordinary Ggantija temples, one of the oldest stone structures in the world, built approximately 5,500 years ago by the island’s earliest settlers, who are believed to have come from Sicily.

The complexity of the structure, and the massive size of the limestone slabs, the heaviest of which weighs 50 tons, suggest a high degree of engineering knowledge and a complex social organisation to enable the moving and construction of such massive megaliths.

With the island continuously inhabited for more than 7,000 years, the first Gozitans are believed to have come from Sicily at some time around 5000 BC, according to carbon dating of pottery shards found in caves on the northern coast. The agrarian and egalitarian society of the Neolithic period was replaced in about 4000 BC by a more sophisticated and hierarchical Temple building society which lasted until about 2500 BC. The construction of the megalithic temples signifies an organised society which was capable of coordinating the actual manpower from a population of between 500 and 2000 needed to build such large and complex structures. The Bronze age, from 2400 until 700 BC, was a time of flourishing culture on Gozo. The new settlers, who again are thought to have come from Sicily, unlike their predecessors inhabited hill tops, built fortifications, and disposed of their dead by cremation rather than burial. They were proficient boat builders and the island itself began to emerge as an important trading post in the Mediterranean.

From 700 BC until the arrival of the Romans in 218 BC, the island was in the sphere of the Phoenician and then Carthaginian trading empires, and Gozo’s name for the first time appears in written Greek texts as Gaûlos. From 218 BC until AD 455 the island was ruled by Rome, achieving a level of prosperity as an important trading centre, being granted a municipal status, a degree of autonomy and even minting its own coinage, with large seaside and country villas being built as can be seen at the excavated sites of Ramla Bay and Xewkija.

Following the collapse of the Roman empire the island was ruled by the Byzantine empire, from which few traces remain, apart from a lead seal which dates from the 8th century AD naming the governor of the island. In 870, Gozo was ruthlessly sacked by North African Arabs as part of the westward expansion of Islam and became known as Ghawdex, the name it retains in Maltese today. Recently discovered documents suggest that religious tolerance was practised, with Jews and Christians continuing to worship, as in many other Mediterranean islands under Arab rule at the time. Few artefacts of this period remain, but the Majmuna stone, a beautiful marble slab marking the tomb of a young girl inscribed with a poem from the Koran is now exhibited in the Gozo Museum of Archaeology. 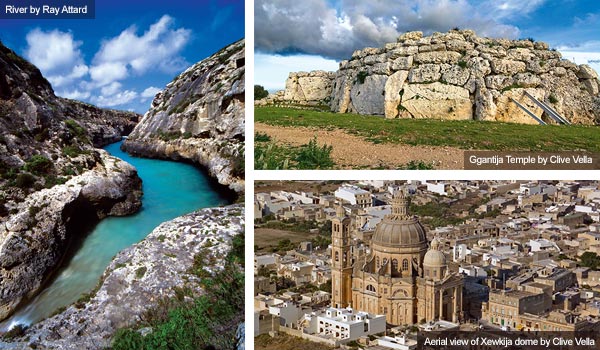 In 1127, one of the most significant dates of Gozitan history, the Maltese archipelago was conquered by the Norman Count Roger, and for the next 300 years the islands became a Christian feudal society, ruled, through alliances formed by strategic marriages, by the Swabians, Angevins and finally the Aragonese, who called the island Gozo – meaning Joy in their native Spanish. In 1530, King Charles V, as head of the Holy Empire, donated Malta and Gozo to the Order of the Knights of St John of Jerusalem, who noticeably failed to immediately repair the dilapidated fortifications of the Citadella in Rabat.

In 1551, after a lengthy siege, a Turkish force breached the walls and took the entire population of 5000 islanders including the governor into slavery. For a brief period the Knights considered abandoning Gozo, but within 50 years the survivors returned and slowly life returned to something approaching normality. Fortifications were strengthened, new houses were built and the island’s capital Rabat began to increase in size. By 1798, when the rule of the Knights came finally to an end, the population of the island had reached 12,000. Briefly, from June until October, Gozo was occupied by French troops led by Napoleon en route to his Egyptian campaign. Unable however to sustain their occupation in the face of a naval blockade led by Admiral Nelson and fierce resistance both in Malta and Gozo, the French were forced to withdraw. For nearly 2 years, Gozo became an autonomous state, recognised by both London and Naples and ruled by its own governor general. But the importance of the island’s strategic location would make it an irresistible prize for the imperial powers, and in September 1800 the British forced out the Gozitan leader and for the next 164 years the Maltese archipelago became a British Protectorate.

Gozo, under British rule, was largely sidelined, as major colonial interests focused on establishing the Grand Harbour in Valletta as a key naval base. But growing political unrest during the 19th century forced the British into ceding more political power to the Maltese, and by 1922 Gozo had its own commissioner to ensure that the island’s voice was heard by the colonial administration in Malta. The island largely escaped the fierce bombing of the siege of the archipelago by Axis forces in 1942, although the privations of food, medicine and other shortages were acutely felt (in midsummer of 1942 it was estimated the archipelago would fall within a few weeks). But Operation Pedestal, an historic allied convoy, managed to run the gauntlet of minefields, enemy ships and dive bombers, losing 9 out of the original force of 14 ships to break the blockade and the islands were able to soldier on. Following the Axis collapse in North Africa shortly afterwards, the Italian fleet surrendered, and with the end of the war in the Mediterranean in sight the British assured the Maltese that independence would be granted at the cessation of hostilities. 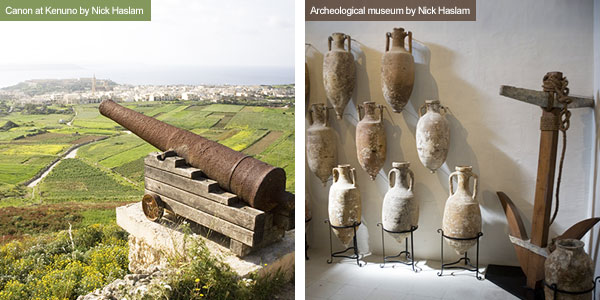 In 1947, a new constitution was introduced which for the first time gave the vote to all over 21, including women and those who had no education or property. But full independence was still a decade away, as the fiery Maltese Labour party leader Dom Mintoff argued for the full integration of Malta into the British Empire. He was however rebuffed by the British, who were preparing to slash defence expenditure and who were wary at the prospect of Maltese MPs in Westminster. Gozo during this time remained largely in the shadows, but for the first time in 1952 civic committees were formed, centred around parish priests, to ensure that the very basic needs of the villages and towns, from electrification to water supply, could be organised at a local level. These small scale committees were relatively successful, and in 1958 a full Civic Council was formed to coordinate all public services at an island level. The elections for this first real local government for Gozo took place in 1961, and within a short time proper sewage systems, the electrification of outlying villages, and even street lighting was introduced throughout the island. Malta finally achieved independence in September 1964, although the British Queen would remain the official head of state until the declaration of a Republic in 1974 and the last British ship steam out of the Grand Harbour of Valletta in 1979.

Little changed in Gozo during the 1960s, with the island governed by its Civic Council led by a commissioner, until in 1973, when the island's administration was once again integrated into the central government of the Malta. With long experience of the perils of being governed by a centralised and distant authority, Gozitans felt that yet again their island was being neglected, missing out on major infrastructural and cultural investment. In 1987, a Ministry for Gozo was finally established, with its base in the capital Rabat, and with the clear aims of equalising government spending and standards of living between the two islands. Today, the Minister for Gozo has a seat in the Maltese cabinet, and the island itself has relative autonomy to decide what aspects of its development and requirements should be funded out of the national budget.


Responsible Travel would like to thank the Ministry for Gozo for their sponsorship of this guide
Photo credits: [Top box: Christmark Chircop]
◄ Scuba diving | Churches ►