The real causes of overtourism 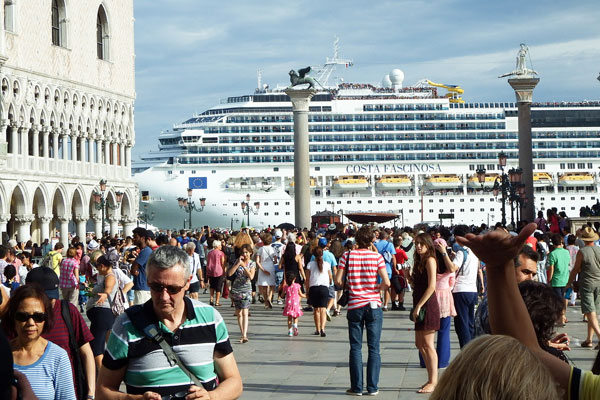 Crowds in Venice. Photo by fdecomite

Summer 2017 saw a media frenzy around 'overtourism.' UNESCO threatened to remove Dubrovnik's World Heritage Site status unless it curbed tourist numbers; local people in Venice organised angry protests against overtourism and cruise ships; and local people on the Isle of Skye called for help because their roads became impassable and they could no longer get their food shopping or visit relatives.

Numerous authors have suggested solutions. In The Guardian, Elisabeth Becker suggested that only governments could solve the problem, while in the same newspaper, Martin Kettle urged tourists to show restraint. People have claimed that the causes of overtourism are a lack of government understanding about the negative impacts of tourism; poor planning; the growth of the middle classes globally; and growth of the Chinese market. All these things are true, but they completely miss the real cause of overtourism, which is the collusion between airlines, cruise ships and governments to create artificially cheap flights and cruises at the expense of the taxpayer and the environment.

Jetcost, for example, advertises a flight to Barcelona, one of the worst affected overtourism destinations, for £19, about the same as a pizza and a beer or two. Michael O'Leary at Ryanair has even said he's aiming to offer free flights.

You might ask, how can super cheap or free flights be possible? Firstly, the global aviation industry sealed a deal in 1944 known as the Chicago Convention that gave them tax exemption for aviation fuel. The lack of duty and no VAT on aviation fuel results in a "subsidy" that, in the UK, amounts to £9bn a year according to Friends of the Earth. Since this report was published, aviation fuel is now subject to air passenger duty (APD) of about £3bn, resulting in about a £6bn subsidy. That's a third of what we pay to be members of the EU, a cost that has had much more scrutiny. When asked about this, former Prime Minister David Cameron said that taxing people's holidays would not be a vote winner. In essence, governments are unwilling to confront the aviation industry about the tax exemption given to its fuel.

In addition to tax free fuel, there have been allegations that some governments pay airlines to land in their countries to attract more tourists. There are also numerous other ways for airlines to earn incomes: insurance and hotel bookings through their website, baggage fees, on board food etc.

The artificially cheap cost of fuel also contributes to the rise in numbers of cruise passengers. Cruise ships burn one of the cheapest and most polluting diesel fuels, known as 'bunker fuel.' This type of fuel, and its associated pollution and public health risks, would not be allowed on land. The car industry faces tough standards, but the cruise industry is somehow allowed to use highly contaminating fuel. This enables them to keep profits high, costs low and invest in building new ships and in marketing to attract more tourists.

The problem with overtourism is that as soon as one destination gets on top on it (like Dubrovnik slashing cruise ship numbers) it just pushes the tourists and the impacts somewhere else. It's like the finger in a leaking dike. 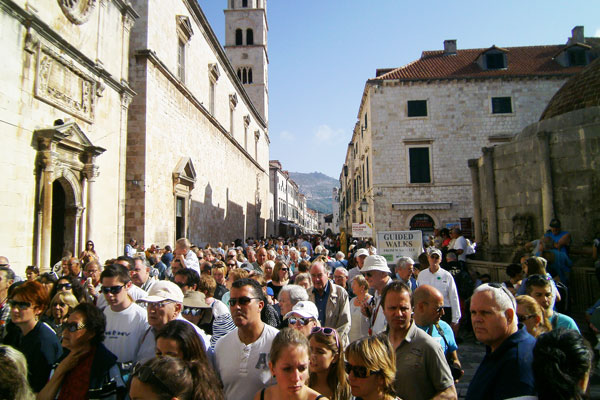 Crowds in Dubrovnik. Photo by amanderson2

Some argue that off-the-beaten-track destinations might benefit from the jobs created if tourist numbers increased. In some places this is true, but many fragile places (culturally and environmentally) can't cope with large numbers of tourists. It's hard to say if the strategy of spreading tourists more widely - away from 'honeypots' - could work. Two billion international tourists, a number which is growing fast, take a lot of accommodating. The problem is not that people want to travel; it's that lots of us all want to go to the same places at the same time, and these places are also people's homes.

The issue of overtourism is not going away. Globally, tourist numbers are growing at six percent a year, and far faster in tourism hotspots. We can expect 20 percent more tourists very soon. Tourism can and must be better managed, to try to create 'better places to live in as well as to visit'. However, these efforts are likely to buckle under the sheer weight of tourists and perhaps this is the issue we will increasingly have to confront. Until we tackle the fuel subsidies given to the aviation and cruise industries we will not solve this problem, as the cost of travel will remain artificially low. Raising taxes and prices will, of course, be massively unpopular, but it's worth remembering those who suffer from these subsidies.

It's not just those people in overcrowded tourism destinations. The growth of aviation is a major cause of CO2 emissions and global warming, to which cruise is also a growing contributor, and cruise particulate emissions can affect passengers health and those living in destinations with cruise ports. At Responsible Travel, our vision for the future would be one in which appropriate taxation of aviation and cruise fuel is used to fund the rapid development of electric planes, and cruise ships powered by renewables. The incentive for airlines and cruise ships to do this is reduced, given the cheap dirty fuels and tax subsidies that they're entitled them to. It's notable how far behind they are with this technology, in comparison to the motor sector which will soon stop making cars powered by fossil fuels.

Our vision would also involve a tourism footprint that is more dispersed, and less focused on a few global hotspots. Destinations will manage tourism first and foremost to protect local people's quality of life and their natural and cultural heritage. Whether that's enough, or whether we simply need less global tourism, I don't know. One thing is for sure: it would be uncomfortable to return to the days where only the rich can travel. It is not the government's job to subsidise the aviation and cruise industries to enable cheap holidays for the relatively small percentage of the global population that is able to travel. What they need to do is protect global populations and enable healthy environments through use of cleaner fuels, for the benefit of everyone.