Menorca is the second largest of the Balearic Islands and lies in the heart of the western Mediterranean, almost exactly halfway between Algiers and Marseille. The island has a total area of 702 square kilometres with 216 kilometres of coastline and the longest distance is 47 kilometres between the two principal towns of Maó and Ciutadella.

Es Castell, on the eastern tip of the island, is the first town in Spain to see the sun rise. The northern half of the island has a rugged rocky coastline, with small beaches of red sand beneath towering cliffs. The rocks here are the oldest on the island, and the gentle rolling hills include Monte Toro, which at 358 metres is the highest point on the island. Exposed to the strong northerly tramuntana wind, vegetation on the northern coast is sparse and few trees soften the stark rocky horizons. But the southern half of the island, known as the migjorn, is largely flat and consists of a limestone plateau with wooded ravines and gorges cut by the rains of thousands of years which lead down to beaches of soft white sand. These sheltered secret areas, with high cliffs honeycombed with caves and tunnels are ideal nesting places for birds of all kinds, from the Egyptian Vulture, with an imposing 2 metre wingspan, to nightingales, whose song echoes throughout the island in spring and early summer. 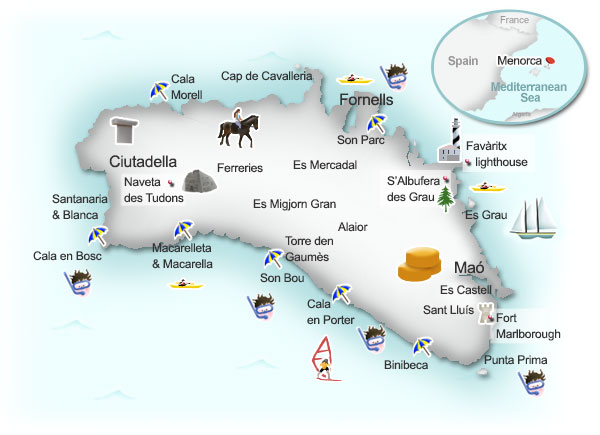 The average temperature throughout the year is an equable 17 degrees, but in summer the maximum can climb into the mid thirties. However, with sea breezes and the frequent tramuntana, a strong northerly wind, it is rare for the island to be uncomfortably hot for too long a time. The summers are dry with practically no rainfall from June until September, but winters are cool and moist, with abundant rainfall and heavy dews which help feed the large natural aquifers in the limestone strata which form a vital part of the islands water supply. The average rainfall varies within the island itself, with the south receiving about 400 mm a year compared with the more abundant 650 mm in the north east closer to the windward side of the island.

Wild olive, prickly pear, evergreen oak flourish on the island, but introduced pine tees are gradually supplanting the hardy indigenous species. Wild herbs grow in the exposed northern coastlines, and in the ravines of the south numerous species of wild orchid and asparagus flourish in spring and summer. Lush pasture divided by the striking dry stone walls, which are such a characteristic and beautiful part of the Menorcan landscape, covers much of the island.

Menorca history
Menorca, with its strategic position at the heart of the western Mediterranean has been at a pivotal point of the development of trade and the growth of civilisation ever since the first settlers from mainland Spain came here in the early Bronze Age. They built stone structures, temples, and elaborate burial chambers, which can still be seen throughout the island. Known as the Talaiotic culture, more than two thousand distinctive standing stones and settlements are scattered across Menorca making it one of the largest open air museums in the world, with the highest concentration of megalithic monuments in the Mediterranean.

Find out more about the Megalithic monuments

The first recorded visitors to the island were Phoenicians followed by Greek traders intent on extending their range of trading posts to the west. The island then experienced a succession of occupiers, from the first Roman colonisation in 123 BC, to rule by the Byzantine Empire in the early 6th century.

In 903 the island became part of the Caliphate of Cordoba and during this period of Muslim domination the island prospered, as trade flourished and people of differing religious beliefs peacefully coexisted. Agricultural production grew and extensive irrigation systems were constructed.

But following the invasion in 1287 by a Catalan army, Menorca went into a decline until the end of the Middle Ages, as the peasant classes were oppressed by both the landowning aristocracy and a powerful church.

The first period of British rule, from 1708 until 1756 is regarded as one of the most fruitful of Menorcan recent history, for Kane abolished the Inquisition, considerably reducing the influence of the church, built schools, reservoirs and hospitals, and laid out the central road between Maó and Ciutadella which is until today known as Kanes Road.

In 1756, Menorca was invaded by 20,000 French troops, leaving the British little choice but to beat a hasty retreat, and for the next 50 years, ownership of the island alternated between the disputing superpowers of Europe.

Finally in 1802 Menorca was returned to Spain and over the 19th century as the industrial revolution transformed Europe, the island became more prosperous, gaining international renown for high quality shoe production, textile spinning, and silver purse manufacture, a precursor of the costume jewellery for which the island is famed today. Dairy production increased, largely thanks to the Friesland cow introduced by the British, and the islands cheeses and butter received international acclaim.

The most significant event of the 20th century  one which would have a lasting affect on the islands role as a tourist destination was the Spanish Civil War of 1936, when Menorca threw its support behind the Republican cause. When Nationalist troops finally invaded in 1939 the island suffered severe and bloody reprisals, yet there was a surprising and unexpected silver lining to the terrible hardships suffered by the islanders. Today, the largely pristine nature on the island is said to date back to Francos desire to punish Menorca by withholding public money for infrastructure development so helping preserve the islands pristine nature and landscapes. In 1977, 2 years after Francos death, the island emerged from 40 years of dictatorship with the first democratic elections and today, the Estatut dAutonomía de les Illes Balears grants a degree of independence to Balearic group. 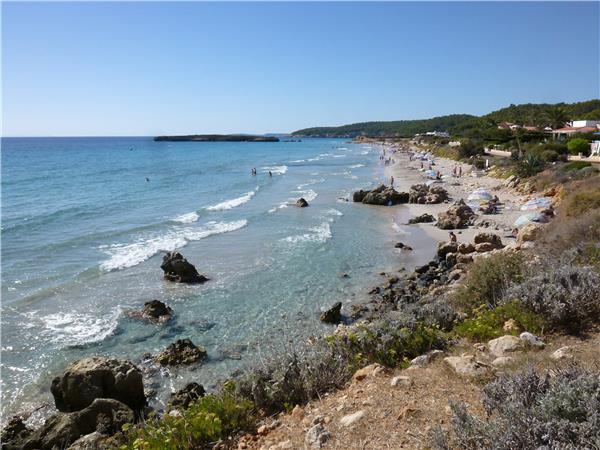