Whale watching  in Antarctica is an incredible opportunity to observe these enormous marine mammals against one of the world's most breathtaking backdrops - with towering blue icebergs, Antarctic mountains and endless black seas swirling around. Read on to find out about the different species you might encounter here, as well as the tragic history of whale hunting in these treacherous waters.

THE CHANGING FORTUNES OF THE WORLDS LARGEST ANIMALS

If youve ever felt that you put on weight far too quickly, spare a thought for the blue whale calf. In a single 24 hour period, a suckling calf drinks around 400-500 litres of its mothers milk and gains up to 90kg in weight. Yep, thats around 3.75kg per hour. This rapid weight gain is necessary, of course, as the young whale needs the energy to swim many thousands of miles to the Polar Regions, and the blubber to survive in the icy conditions. These waters are rich in krill, the tiny food source which sustains these marine giants, the largest animal that has ever lived.

The legacy of whaling

Unfortunately, the thick layer of blubber that keeps all whale species alive is also what once nearly killed them. Whales have been hunted by coastal subsistence communities for thousands of years, but as societies industrialised in the 19th century, the demand for blubber  which was boiled to create valuable oil  soared. The whales feeding grounds in the Polar Regions were the preferred hunting grounds; while the hunters began setting up whaling stations in the more accessible Arctic, they soon moved to the Subantarctic Islands and Antarctica, and the first blue whale was killed off the coast of South Georgia in 1904. In the summer season of 1930-31 alone, 29,400 blue whales were killed in the Antarctic waters. The bounties were high, and whalers braved the harsh polar conditions and dangers of whaling in pursuit of the whales. By the time that the International Whaling Commission (IWC) banned the hunting of blue whales in 1966, over 370,000 had been slaughtered  with 330,000 of these taken in Antarctica alone. Just 360 individuals remained there, from an initial estimate of 240-300,000.
It is hard to estimate how many blue whales exist in the world today, as they are elusive, solitary and deep divers, although their numbers are recovering. They are still endangered, but their summer migrations to Antarctica means this remains one of the best places in the world to encounter these incredible creatures, which measure up to 30m long, and weigh in the region of 150 tonnes. Despite their enormous size, they are surprisingly elusive, which makes a sighting all the more special. However, there are six other whale species which are more commonly seen during Antarctic cruises, along with orcas.

Minke whales are curious creatures, and have been known to approach boats. They are around 8m long and delightful to watch, as they often leap right out of the water, particularly when feeding. They are one of the most commonly spotted whales on Antarctic cruises, and are often seen around the pack ice. Humpback whales are also known for their astonishing acrobatics; they lunge vertically out of the water (known as spy hopping), or throw themselves down on their backs, which is impressive given the humpbacks huge size. They are also easily recognisable by their enormous flippers, which can measure a third of their body length, and are often waved energetically in the air. Antarctic cruises often pass through known humpback feeding grounds; they can cluster here in groups of over 20 individuals.
Bulbous-headed sperm whales are often encountered in Antarctica  although only the males migrate here, as they lead largely solitary lives away from the females and calves, who prefer warmer waters. Sperm whales dive deeper than any other species of whale, typically down to 400-800m, but it is believed that they can reach depths of 3,000m. This helps them hunt their favourite food: giant squid.
Killer whales  also known as orcas  are, in fact, dolphins, and over two thirds of all the worlds orcas live in Antarctica (around 70,000). The incredible hunting skills of these notorious predators will be well known to fans of wildlife documentaries, and in Antarctica they feed on fish, seals and even minke whales.

When & where to see whales in Antarctica

Whales can be seen on Antarctic expeditions right through the season from December to April, but February and March are the peak months for sightings.
Whales can be found all around Antarctica starting with the Drake Passage crossing  but particular hotspots include Wilhelmina Bay  known as Whale-mina Bay due to the extraordinary number of whales found here  largely due to the availability of krill. Humpback whales are particularly common in the bay.
The Lemaire Channel is an 11km-long virtual aquarium set against a breathtaking backdrop of sheer clips, giant icebergs and glaciers. Its lake-like waters, which mirror the surrounding scenery, shelter humpback and minke whales, orcas, penguins and dolphins amongst other species. Its known as the Kodak gap thanks to the number of rolls of film that must have been fired off here over the years. Both locations are usually included on Antarctic cruise itineraries, conditions permitting.
Photo credits: [Top box: Vassil Tzvetanov] [Blue whale: NOAA Photo Library] [Orcas: NOAA Photo Library] [When and where: Christopher Michel]
Written by Vicki Brown 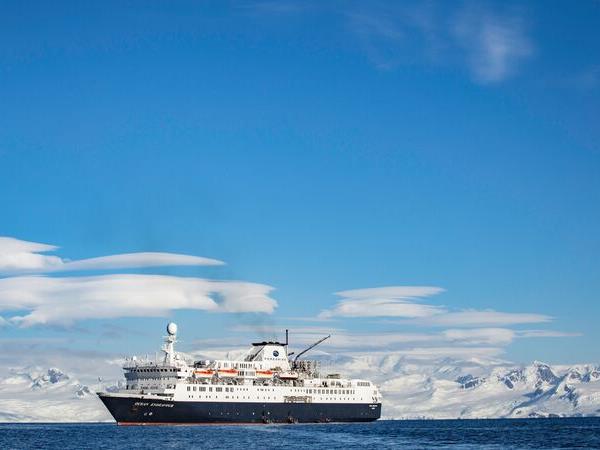 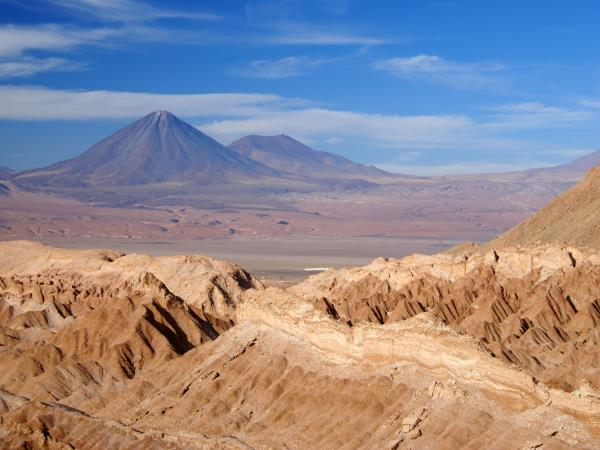 Walk in Atacama and Patagonia before cruising Antarctica 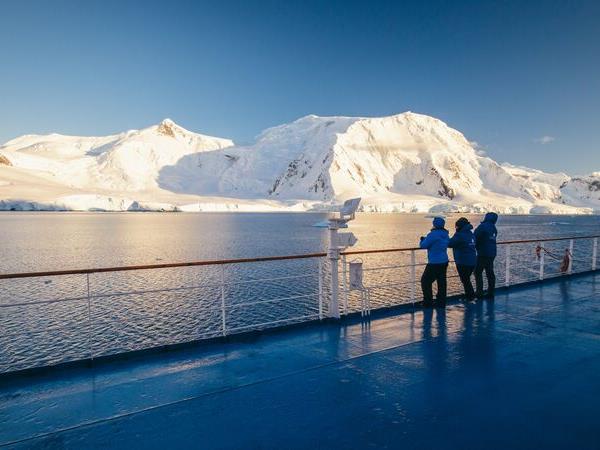 A 14-day expedition to both sides of the Antarctic Peninsula